Flow country wind farm 'one of the most worrying ever seen'

RSPB Scotland has formally objected to an application for a wind farm, which is at the heart of Scotland's globally important Flow Country. The charity has described the development, proposed by SSE, owners of Scottish Hydro, as 'one of the most worrying it has ever seen'. The Flow Country is the common name given to the incredible peatlands of Caithness and Sutherland, in the far north of Scotland. The peatlands are one of the world's rarest habitats. As well as being a vital home for many bird species, the area is an important carbon store.

The application is for a 47-turbine wind farm in a non-native conifer plantation, one of the many planted on the Flows peatlands in the 1970s. These plantations have now been universally acknowledged as a mistake and are the subject of large-scale restoration work supported by many Government agencies and local groups. In its 30-page submission, RSPB Scotland criticised this proposal for its impact on breeding birds and its location, which is also slap bang in the middle of an internationally important landscape-scale wildlife site, the Caithness and Sutherland peatlands Special Protection Area (SPA). This area is home to a wide range of rare and endangered breeding species such as Golden Eagle, Hen Harrier, Merlin, Black-throated Diver, Red-throated Diver, Greenshank and Golden Plover. RSPB Scotland fears a wind farm at this site would pose a serious risk to many of these already vulnerable bird populations. 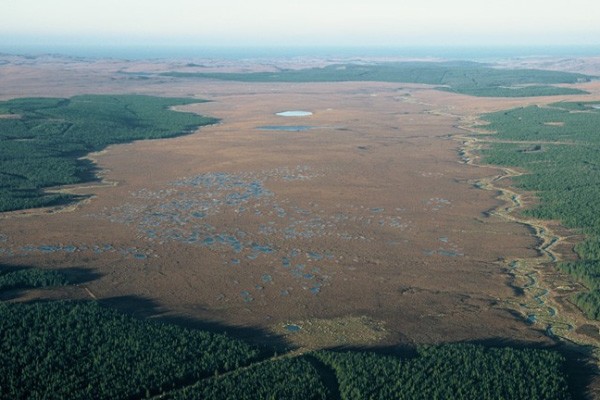 There is also concern that the development would undermine a shared vision to restore huge swathes of precious blanket bog within the Flow Country. This work, by government and various conservation and community organisations, will help improve the peatland habitat for many rare plants, birds and animals, while playing a critical role in the fight against climate change. Just last month, the Scottish Government announced £15 million worth of new funding to support restoration of Scotland's peatlands, such as those in the Flows.

Stuart Housden, Director of RSPB Scotland, said: "This is, without doubt, one of the most worrying wind farm applications we have seen in Scotland. Not only does it risk harming some of the UK's rarest species, it would make restoration of this core part of the globally important Flow Country much more difficult. The blanket bog and peatland habitat of the Flows is so special and rare that it is protected by law and is currently the subject of a multi-million pound funding bid by the Peatlands Partnership for ambitious restoration and public engagement work. The Partnership, comprises RSPB Scotland, Scottish Natural Heritage (SNH), Forestry Commission Scotland, Highland Council, Plantlife, the University of the Highlands and Islands, as well as key stakeholders and individuals from the local community. The Flow Country is also on the UK Tentative List for inscription as an UNESCO World Heritage Site."

"Wind farms play a vital part in tackling climate change but damage to our most important places for wildlife must be minimised. Over the last few years, SSE have shown that they can be a responsible developer, abandoning or amending some proposals elsewhere in Scotland that would have harmed wildlife — but this proposal sticks out like a sore thumb in their current portfolio. That they would consider something like this, in such a vital home for nature is very disappointing. It cannot be allowed to proceed. We hope SSE reconsiders its plans or that Scottish Ministers quickly reject this application."