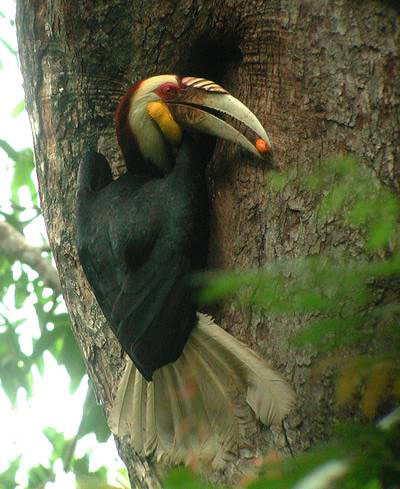 A team from the Malaysian Nature Society (MNS) has established the first confirmed nesting of a pair of Wreathed Hornbills Aceros undulates in Malaysia.

The discovery was made during a survey of hornbills in the Temengor section of the Belum-Temengor Forest Complex at the end of May 2007, by MNS Hornbill Conservation Project Field Officer Lim Kim Chye, Lim Swee Yian and an indigenous tracker. The male bird was observed feeding berries to its mate in a sealed hole with a chick inside.

The Wreathed Hornbill's range extends from North-east India and Myanmar to South-east Asia to the greater Sundas and Bali. Although Wreathed Hornbills are recorded in Malaysia, no nesting tree had ever been found due to their secretive nature and the inaccessible terrain.

Belum-Temengor is the only place where all ten hornbill species occurring in Malaysia can be found together. "These hornbills are known to migrate long distances in search of fruiting resources and therefore require large contiguous areas of forest to survive," said Yeap Chin Aik, Head of Conservation. "The Belum-Temengor complex has time and again proved to be a hotspot for hornbill diversity."

For the past two years, the MNS team has been locating nesting hornbills with the assistance of indigenous communities living in the forest complex. As a result, nine other hornbill nests from five other species have been found in the Temengor section. These include the Helmeted Hornbill Rhinoplax vigil, Great Hornbill Buceros bicornis, Rhinoceros Hornbill Buceros rhinoceros, Bushy-crested Hornbill Anorrhinus galeritis and Oriental Pied Hornbill Anthracoceros albirostris.

"These discoveries further reiterate the importance of Belum-Temengor to hornbills," said Yeap Chin Aik. "It also gives hope that the globally threatened Plain-pouched Hornbills, a close relative of the Wreathed Hornbill, may perhaps be nesting in Belum-Temengor too."

In May 2007 the Perak State Government gazetted the Royal Belum State Park. This followed a six-month campaign by MNS which received the support of more than 80,000 people through postcards and online signatures. A total of 117,500 ha has been set aside as the State Park, roughly a quarter of the area (280,000ha) MNS has been lobbying for.

The Temengor Forest Reserve, however, remains unprotected, classified as a Permanent Forest Estate under Malaysian law. Logging still continues, although the Perak state government announced in August 2006 that this will cease by 2008.

As a recipient of the Disney Wildlife Conservation Fund 2007 award, MNS will continue to monitor the hornbills of Belum-Temengor to address current gaps of knowledge on this exciting species; to provide further justifications to advocate for protection.