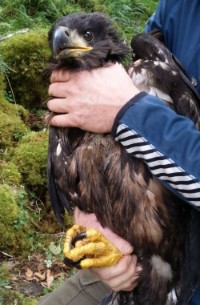 The first two White-tailed Eagle nests in Co Kerry in over a century have successfully fledged their young this month.

Between them, the two pairs — one in Killarney National Park and another on the Beara peninsula near Kenmare — fledged one youngster each. This was the third attempt by the Killarney pair while the Beara pair succeeded at their first attempt.

Since fledging, the Killarney chick has been closely followed and fed by its parents around the Lower Lake where the trio have been seen by local boatmen and visitors alike. It's likely that the young eagle will spend the next few months around the lakes of Killarney before wandering more widely across Ireland.

Over the past month four young White-tailed Eagle chicks fledged successfully from nests in counties Kerry, Clare and Galway, bringing the number of fledged youngsters from wild nests in Ireland to seven since 2013. Four of these have come from the same nest at Lough Derg near Mountshannon, Co Clare. A second pair at Lough Derg also fledged a single chick in 2015, though a fifth nest near Glengarriff, Co Cork, failed with the youngster dying shortly before fledging.

The expansion of the Irish breeding population across four counties is a positive step towards achieving a self-sustaining and viable population of White-tailed Eagles in Ireland, even if the population remains small. So far in 2015, three adult eagles have been lost to human-related mortality. Lough Derg is viewed as a crucial site for farming along its shores is predominately cattle, meaning that dangers associated with nesting in upland sheep country (i.e. continued use of illegal poisons by some landowners) are lessened.