The first stage of the RSPB's Wallasea Island Wild Coast Project, just north of Southend, Essex, has been completed and was opened on Friday.

The government and the European Commission will officially open Jubilee Marsh today, marking the completion of the first phase of the RSPB's Wallasea Island Wild Coast Project, a world-class initiative in Essex in which the conservation and business sectors have united to help wildlife and local communities adapt to ongoing climate change.

With climate change predicted to have an increasingly severe impact on wildlife and people, DEFRA Environment Minister, Rory Stewart, and European Environment Commissioner, Karmenu Vella, will visit Wallasea Island to see how a unique partnership between the RSPB and Crossrail is creating a landscape helping to roll with the punches of climate change. It is hoped this project will inspire similar initiatives between business and conservation elsewhere in the UK and the European Union.

Over three million tonnes of material excavated from London as part of the Crossrail project was shipped to Wallasea to create Jubilee Marsh, named in honour of the Queen's Diamond Jubilee, which was held when work on the marsh began in 2012. A five-tonne, 7-m tall cutter arm from Tunnel Boring Machine Victoria, one of eight machines that created more than 26 miles of new tunnels under the capital, will be unveiled as a permanent monument to this innovative partnership. 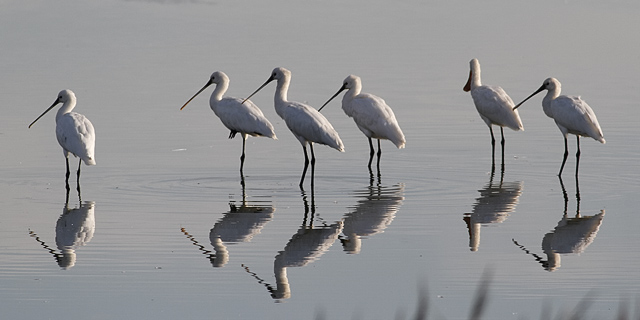 The RSPB hopes that Spoonbill's colonisation may be helped by creating appropriate habitat at places like Wallasea Island (Photo: Russell Hayes)

The project will safeguard local wildlife and communities from rising sea levels, including providing a habitat for the arrival of wetland species from further south in Europe which are expected to colonise southern England as the climate continues to change. It is a long-term project and will require a further 7 million tonnes of soil to complete, and when finished will have moved forward the science of landscape engineering by creating intertidal habitats on the largest scale ever seen in Europe.

Rory Stewart said: "Wallasea Island is a fantastic example of how creative thinking can bring development and environmental protection together. This kind of sustainable growth allows us to protect our natural environment while putting in place the infrastructure our country needs to grow.

"The Essex estuaries are one of our most beautiful natural assets and thanks to the vision and hard work of RSPB and Crossrail, the area will continue to flourish and support our diverse wildlife for decades to come."

RSPB Chief Executive Mike Clarke said: "This partnership has proven that it's possible to create the conditions for developing a world-class economy alongside a world-class environment. We hope that this way of working together will become a model for similar initiatives to recreate threatened habitats and protect species elsewhere in the UK and across Europe."

The RSPB's vision has been redrawing the map of south Essex. Originally farmland lying below sea level, Wallasea Island was becoming increasingly difficult to defend from rising sea levels. Using over 3 million tonnes of unwanted soil from tunnels of the Crossrail project, in just three years the land level has been raised and the sea defences breached to create a mosaic of intertidal habitats, reducing flood risk and benefiting species like Brent Goose, Dunlin and Avocet.