One of the first two White-tailed Eagles to fledge successfully from a nest in Co. Clare in 2013 has been found dead in Tipperary. The young male was reared by a pair of White-tailed Eagles at a nest on Lough Derg, near Mountshannon in Co. Clare, and successfully fledged from the nest in July 2013, along with its sibling. After a few months of care by their parents, both young eagles began to disperse more widely and eventually became independent. The last confirmed sighting was of one of the two juveniles near Dromineer, Co. Tipperary, on the east shore of Lough Derg in January.

After information supplied by a member of the public and a subsequent search on lands on the shore of Lough Derg by an officer from the Department of Arts, Heritage and the Gaeltacht's National Parks & Wildlife Service (NPWS) and the reintroduction project team, the dead White-tailed Eagle was found near Ballinderry, North Tipperary, on the north-east shore of Lough Derg. A subsequent post-mortem by pathologists at the Regional Veterinary Laboratory at Knockalisheen, Limerick, showed the young eagle had been shot, the body holding some 45–50 shotgun pellets. The impact of the shooting had broken one of its legs and wings, but the bird survived some weeks after the shooting before dying. The horrific nature of the bird's shooting and ultimate death have shocked all those involved in the reintroduction project. 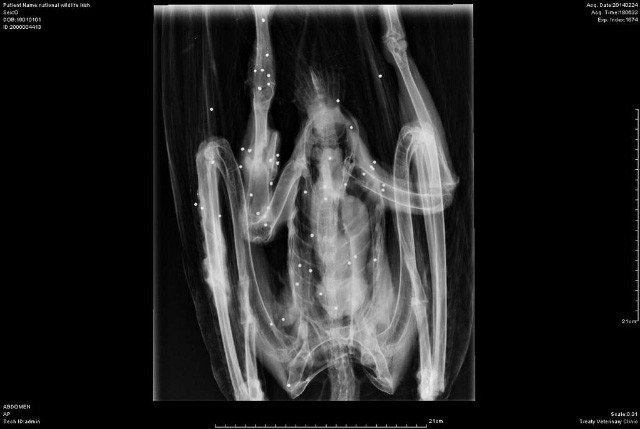 Investigations by both An Garda Siochána and the NPWS into the shooting are ongoing. Jimmy Deenihan TD, Minister for Arts, Heritage and the Gaeltacht, said: "I am shocked by this crime. The birth of this bird was a special day for nature conservation in Ireland. So much work has gone into reintroducing this species here, and there has been wonderful co-operation by many different groups to achieve successful breeding. To have all this undone is a significant blow. Eagles are protected by law. I would urge anyone with information to contact An Garda Siochána or my Department's staff in the area."

Local NPWS District Conservation Officer Stefan Jones stated that the available evidence indicated that this offence resulted in an especially drawn out and horrific death for the young eagle. "This bird would have been unable to fish and forage as normal, and it appears that it slowly starved to death as a result. Bearing in mind the broken limbs and the fact that it had approximately 50 shotgun pellets in it, it is amazing it managed to survive for such a period."

"Finding one of the first two young White-tailed Eagles to fly from a nest in Ireland shot dead is heart-breaking," added Dr Allan Mee, Reintroduction Project Manager. "It is absolutely incomprehensible that someone would shoot one of these magnificent birds but even more shocking is that one of the first two Irish-bred eagles has been shot only seven months after leaving the nest." 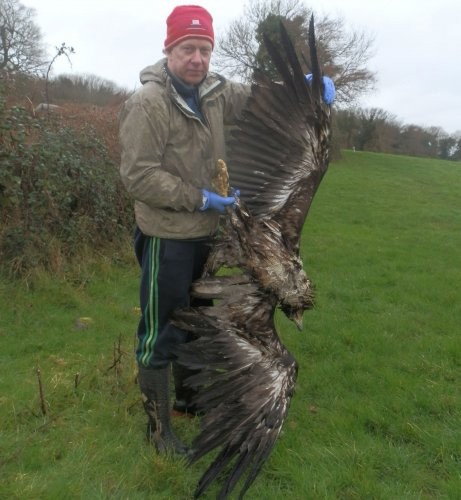 The dead White-tailed Eagle (Department of Arts, Heritage & the Gaeltacht).

The loss of one of the new generation of Irish-bred chicks comes as a serious blow to the reintroduction project. White-tailed Eagles reach maturity and begin breeding at about 4–5 years of age. The goal of re-establishing a viable population of the species depends on young Irish-bred eagle surviving and joining the breeding population.

"Although all losses impact the project, for me the loss of this male, the first Irish-bred White-tailed Eagle of the reintroduction programme, is especially difficult to take," added Dr Mee. "This bird and its sibling were the hope for the future of the species in Ireland. Many people spent months closely watching this bird's progress until it flew from the nest near Mountshannon last year. I feel gutted for these people as well as the bird. Let's hope its sibling and the other chicks to fly from nests in Ireland in 2014 will see a better fate. Ultimately it is up to ourselves to make this happen by cherishing the wonderful wildlife we do have, including eagles, and their habitats."

John Harvey, Chairman of Mountshannon Community Council, reflected the shock felt locally in East Clare at the news that the first White-tailed Eagle chick reared in Ireland has been shot. "We are absolutely appalled that someone could have done this to such a magnificent bird. The chicks that flew the nest in Mountshannon last year captured everyone's imagination. Local people have been heavily involved in watching the breeding pair here and the progress of their two chicks. We are sickened to think that someone would callously shoot them. It feels like we haven't moved on as a people all that much since the dark days when these magnificent birds were wiped out."

White-tailed Eagles are protected under the Irish Wildlife Act (1976) and it is an offence to shoot or otherwise harm the species. Anyone with information on this crime should contact, in confidence, An Garda Siochána at 067–50450 or the National Parks and Wildlife Service at 076–1002501.