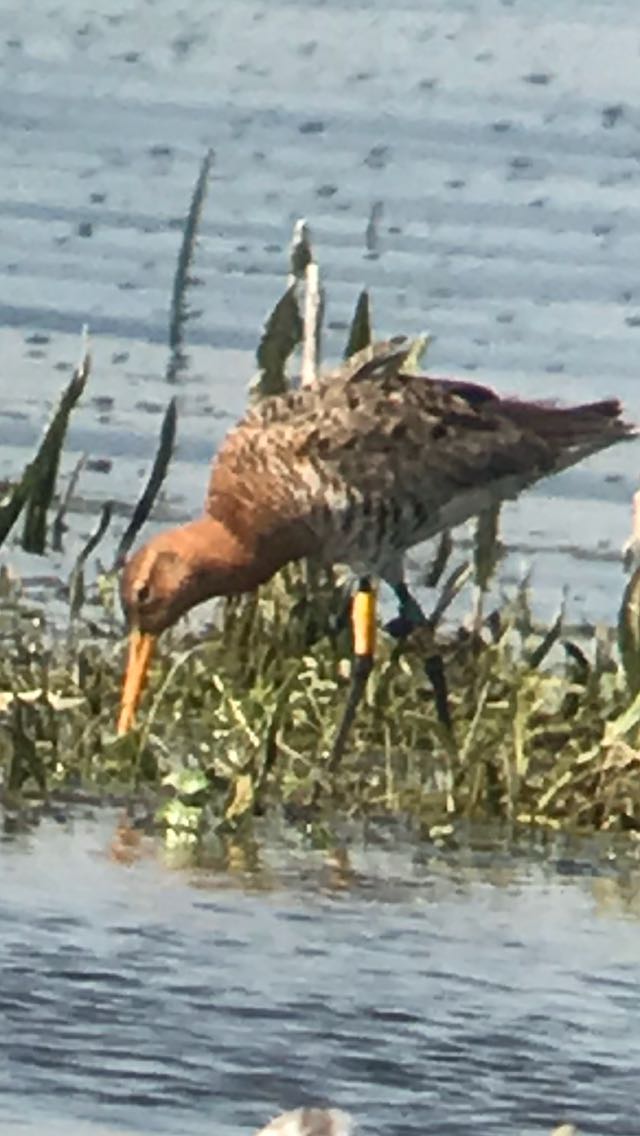 A Black-tailed Godwit that was hand-reared at Welney WWT, Norfolk, has returned to the East Anglian Fens after migrating as far as Portugal for the winter, the Wildfowl and Wetlands Trust (WWT) has announced.

The bird (pictured) is one of 26 Black-tailed Godwits raised at the Norfolk reserve, and released into the wild in summer 2017. The wader, a male, has been named ‘Delph’ after the riverbank where it was sighted.

This is welcome news for conservationists at the RSPB and WWT, who have formed an innovative partnership called Project Godwit which aims to help Black-tailed Godwit, a species in decline in Britain.

WWT Project Godwit Aviculturist Louise Clewley made the discovery. She commented: “It was right in front of Welney’s main observatory for everyone to see! Migration is fraught with danger and the successful return of the first of our UK hand-reared batch gives us hope for the future of these birds.”

Although some Black-tailed Godwits return to their breeding site in the first year, it’s not unusual for others to remain on their wintering grounds for their first summer.

Hannah Ward, RSPB Project Godwit Manager, said: “We weren’t necessarily expecting any of the hand-reared birds to return this summer so this is a wonderful and welcome surprise. We may have to wait until next summer before this young bird breeds, but this is a fantastic moment for the Project Godwit team and great news for this magnificent but threatened species.”

The eggs of the endangered birds were collected from the wild in spring 2017 by RSPB and WWT staff and hatched and raised in captivity to boost their chances of reaching maturity.

Raising young birds from eggs collected in the wild is known as ‘head-starting’. The technique is proving a powerful tool for bird conservation, having been used in Russia to help stabilise numbers of the critically endangered Spoon-billed Sandpiper. By head-starting Black-tailed Godwits, experts from Project Godwit are aiming to increase the small breeding population on the Ouse and Nene Washes, the species' two main breeding sites in the country.

Head-starting is just one aspect of Project Godwit, which also focuses on monitoring, habitat management and trialling conservation techniques. The initiative is a partnership between the RSPB and WWT, with major funding from the EU LIFE Nature Programme, HSBC’s 150th Anniversary Fund, Natural England and the Heritage Lottery Fund, through the Back from the Brink programme. The project aims to secure the future of breeding Black-tailed Godwits in the UK.

Conservationists are encouraging birders to look out for these special birds. Sightings can be registered at projectgodwit.org.uk.