Find out what's inside the October issue of Birdwatch 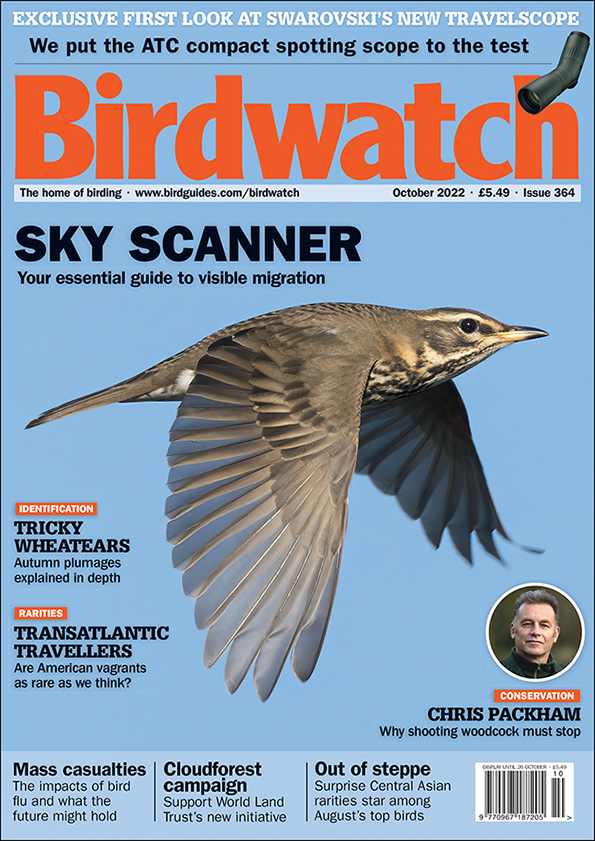 You can now read the October 2022 issue of Birdwatch as either a digital download or the paper magazine. The paper magazine is available in the shops from Thursday [22 September] – or you can order online.

There are few more spectacular autumn sights than watching thousands of migrating birds – in the October issue of Birdwatch, Andrew Hanby provides a comprehensive introduction to visible migration ('vis-mig'), detailing suitable places, weather conditions and the species to expect.

Also this month, wheatear expert Brian Small discusses the identification of Pied, Eastern Black-eared and Western Black-eared Wheatears in autumn plumages, detailing how to separate them from the more familiar Northern Wheatear.

October is traditionally the best time for encountering vagrant American landbirds on this side of the Atlantic – but just how under-recorded are they? Josh Jones argues that the largely unexplored west coasts of Britain and Ireland have so much more to give.

The UK's woodcock population is in rapid decline. Chris Packham outlines why it is imperative that the hunting season for this species is postponed until 1 December and urges all Birdwatch readers to sign the Wild Justice petition set up to force the government’s hand.

The impacts of bird flu over the past year have shocked the birding world. David Campbell looks back at a summer of suffering and ponders what the future might hold for the virus.

Also in this issue, the World Land Trust introduces its new Big Match Fortnight campaign, outlining how Birdwatch readers can help protect the spectacular Río Anzu and Río Zúñac valleys, on the eastern slope of the Ecuadorian Andes.

Plus: an exclusive first look at Swarovski's new travelscope, topical comment from columnists Lucy McRobert, Bill Oddie and Alan Tilmouth, advice on building your birding skills and knowledge and our expert panel answers your questions.

October's digital edition has lots of bonus content, including:

•    Video of Pied Wheatear;
•    Film of Eurasian Woodcock;
•    Video and calls of classic vis-mig species;
•    Footage of North American passerines;
•    Sound recordings of a selection of alarm calls;
•    Film of rarities and scarcities from Britain, Ireland and the wider Western Palearctic.