Find out what's inside the November issue of Birdwatch 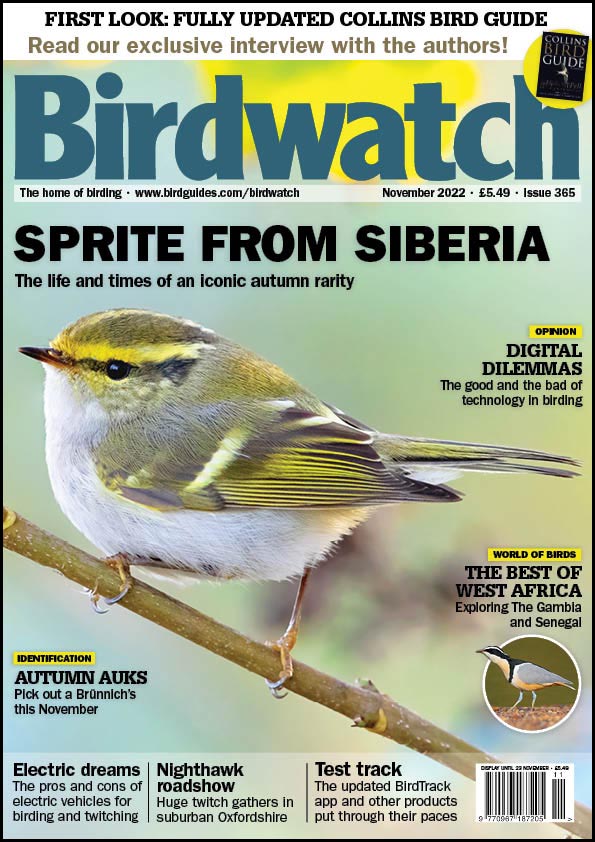 You can now read the November 2022 issue of Birdwatch as either a digital download or paper magazine. The paper magazine is available in the shops from Friday [28 October] – or you can order online.

Few could argue that there is a more iconic late autumn rarity than the exquisite Pallas's Warbler. In the November issue of Birdwatch, Andy Stoddart pays homage to this delightful 'Sibe', profiling the species and looking at its history as a visitor to Britain and Europe.

With the publication of the third edition of the hugely popular Collins Bird Guide scheduled for mid-November, we sit down with authors Lars Svensson, Killian Mullarney and Dan Zetterström to discuss what to expect from this fully revised and updated field guide.

Glancing offshore in late autumn, especially after a northerly blast, can see our seas awash with passing auks. In this month's ID focus, expert seawatcher Mark Newsome talks through how to separate five similar species while seawatching at this time of year, including the scarce Little Auk and mega-rare Brünnich's Guillemot.

Also this month, Julian Hough weighs up the pros and cons of rapidly advancing technologies in birding and the impacts they may have upon us, while David Campbell shares his experiences of birding and twitching while using an electric car. Meanwhile, Kit Day brightens up the short November days with his report on a recent trip to The Gambia and Senegal, which saw him connect with a host of vividly coloured and highly desirable species, including Egyptian Plover and Scissor-tailed Kite.

The November issue also includes an exlusive finder's account of Britain's first Least Bittern, as well as a detailed report on the Oxfordshire Common Nighthawk, as well as full round-ups of an eventful September for rare birds.

Plus: Mike Alibone is left impressed by Viking's new travelscope, we review the new BirdTrack app, columnists Lucy McRobert and Alan Tilmouth provide topical comment and there's advice on what to do in the field this November, while our team of experts answers your ID queries.

November's digital edition has lots of bonus content, including: