Find out what's inside the January 2023 issue of Birdwatch 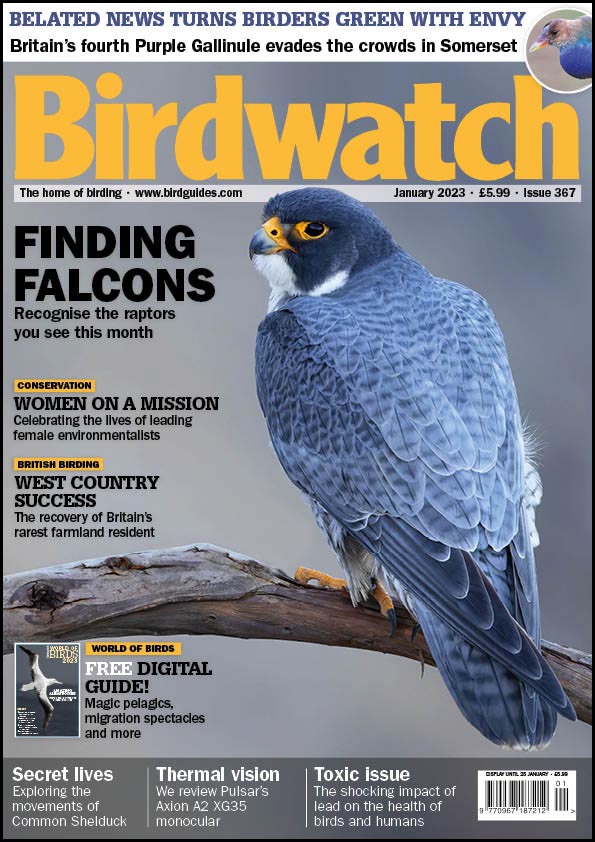 You can now read the January 2023 issue of Birdwatch as either a digital download or paper magazine. The paper magazine is available in the shops from Thursday [22 December] – or you can order online.

This month's magazine is guest edited by Lucy McRobert and celebrates the contribution of women to global ornithology, conservation and birding. In our main feature, Lucy shares some of the inspiring stories from women who are fighting to save nature around the world.

After a precipitous decline in its numbers, targeted conservation action has brought Cirl Bunting back from the brink to the point that it is now spreading north and east once more in England. The RSPB's Cath Jeffs details the efforts made over the past few decades and why this project has been so successful.

Common Shelduck is a widespread species with a striking plumage. However, as Ros Green explains, it is often overlooked in favour of the waders and other waterbirds that are often seen alongside it – but GPS tracking studies are revealing fascinating new information.

Lead shot poisons birds and humans, yet it is still used. Debbie Pain looks at what is being done to address a situation that has been known about for centuries, and finally sees light at the end of the tunnel.

This month's ID guide looks at the falcons you may encounter in the winter months. Dawn Balmer offers expert tips on how to separate Merlin and Peregrine Falcon from the more widespread Common Kestrel, while also looking at rarer possibilities.

Thermal imaging devices are increasingly being used by birders to extend their hours of observation, and Mike Alibone conducts an in-depth review on a popular model from Pulsar in this month’s magazine.

The January issue also includes an exclusive finders’ account of the Somerset Purple Gallinule, as well as exhaustive round-ups of November's top birds across Britain, Ireland and the Western Palearctic.

Plus: columnists Laura Wade, Hep Cairnswood and Jasmine Qureshi offer their entertaining takes on birders and birding, our experts offer seasonal birding advice and answer your questions, as well as reviewing the latest birding books and other products.

January's digital edition has lots of bonus content, including: