A 'super-pod' of 1,428 Atlantic White-sided Dolphins was slaughtered in the Faroe Islands on Sunday evening [12 September 2021].

Driven ashore over several hours to the beach at Skálabotnur, the huge group of cetaceans was then massacred by local participants taking part in the Grindadráp, a tradition that has taken place in the archipelago since the 9th century.

Some Faroese consider whale and dolphin meat an important part of their diet and culture, but the scale and handling of this latest 'Grind' has drawn criticism in the Faroese media and even some outspoken pro-whalers and politicians have raised concerns. 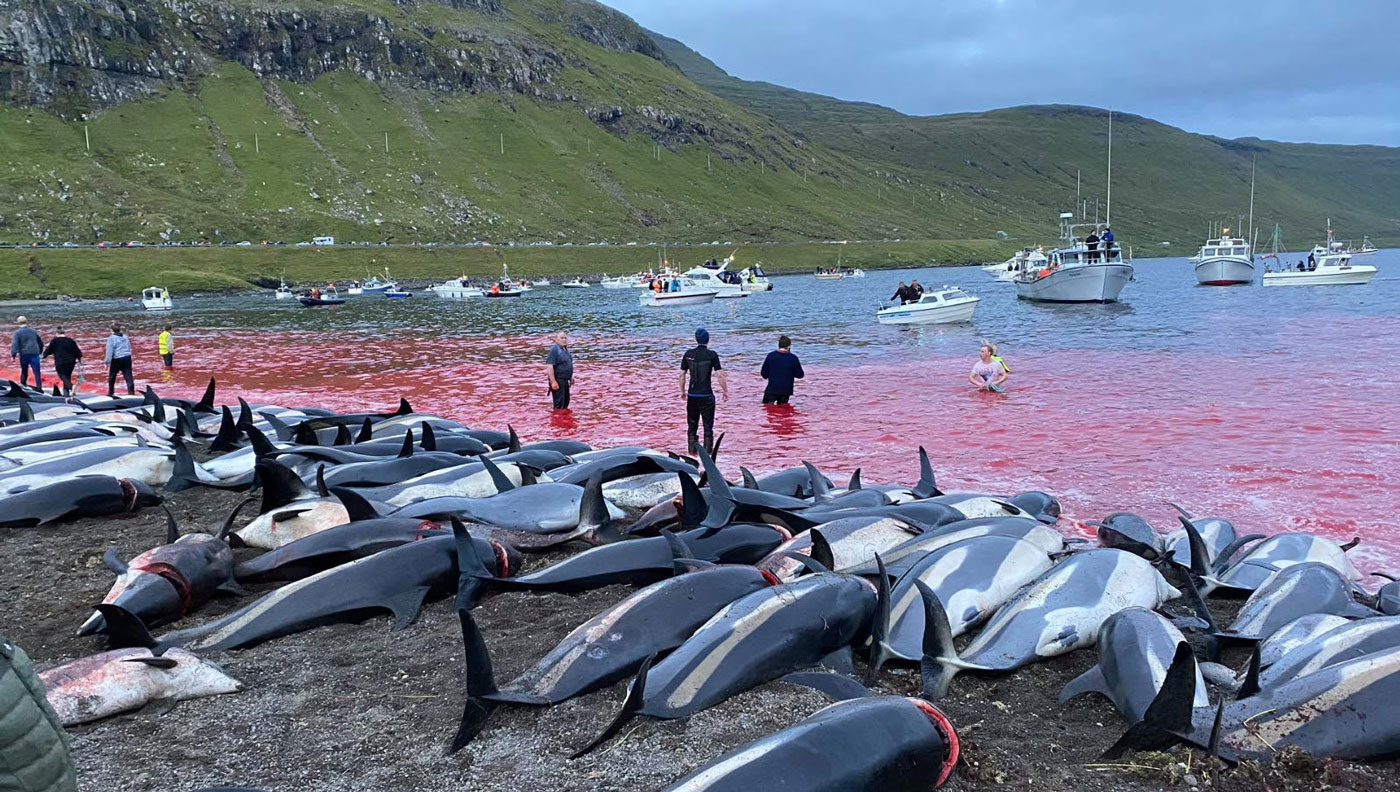 A huge pod of 1,428 Atlantic White-sided Dolphins was slaughterd in the Faroe Islands on the evening of 12 September (Sea Shepherd).

Some locals claim that several Faroese laws were broken. Firstly, the Grind foreman for the district was never informed and therefore never authorized the hunt. Instead, it was another district's foreman who called the Grind without the correct authority.

Secondly, many participants of the hunt had no license, which is required in the Faroe Islands, since it involves specific training in how to quickly kill the pilot whales and dolphins. However, footage shows many of the dolphins were still alive and moving even after being thrown onshore with the rest of their dead pod.

In addition, photos show many of the dolphins had been run over by motorboats, essentially hacked by propellers, which would have resulted in a slow and painful death.

The hunt has been reported to the Faroese police for these violations.

Rob Read, COO at Sea Shepherd, said: "For such a hunt to take place in 2021 in very wealthy European island community just 230 miles from the UK with no need or use for such a vast quantity of contaminated meat is outrageous."

Meat from a Grind is normally shared among participants, with the remainder going to locals in the district where the hunt takes place. However, such a large quantity of victims in this latest killing could potentially mean that much of it will be dumped.

Already this summer 615 Long-finned Pilot Whales have been killed in the Faroe Islands, meaning that the number of cetaceans slaughtered across the archipelago this summer has now passed 2,000.