A female Golden Oriole found by a cleaner at a Leicestershire school has been released into the wild by rescuers.

The bird was brought to Feline and Wildlife Rescue Nottingham (FAW) after being found too weak to fly at a school in neighbouring Leicestershire. The team spent several days feeding it before it was strong enough to be released. 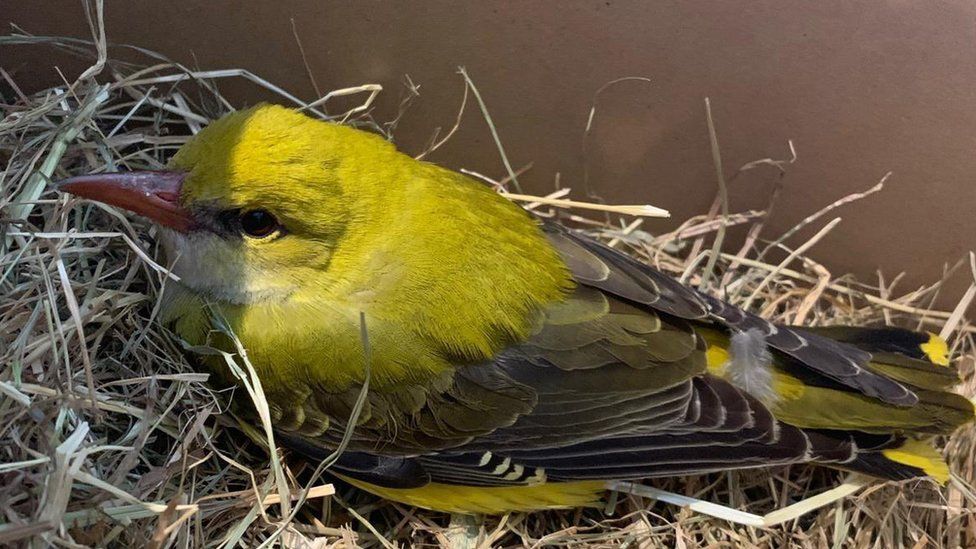 The female Golden Oriole found in a Leicestershire school (FAW).

FAW said the "enigmatic" female bird was found suffering from exhaustion by a cleaner at Long Field Academy in Melton Mowbray on 12 May and brought to them by a vet. Its avian lead, Beth Ragan, persuaded the weak bird to eat by offering up an array of insects and fruits.

In order to minimise stress to the bird, video cameras were used to monitor its progress remotely. Within a few days it was well enough to continue on its way and the group released it from a secret location in Nottingham on Saturday.

"It was magical – probably the first and last time in my life I will see a Golden Oriole in this country," said FAW volunteer Victoria Hayward. "To watch a healthy bird flying to freedom is hugely rewarding, and one of the reasons we do this work."

FAW said it had worked with the British Trust for Ornithology (BTO) to ring and record the bird for conservation purposes. The record comes amid a small influx of the species to Britain this spring.