The first assessment of the state of more than 1,000 threatened species and hundreds of threatened habitats across 25 members of the European Union — published today by the European Commission — highlights how much of the continent's most important wildlife remains in a perilous state. Of particular concern is the state of wildlife in northwest Europe — known as the Atlantic biogeographical region — including the UK. The report — which focuses on threatened habitats and species protected under the EU Habitats Directive — highlights that the vast majority of the continent's most important species remains in serious danger. The information was provided by the governments of member states. Despite some improvements thanks to special nature conservation efforts, the report points at what many have expected before: the EU is very likely to miss its 2010 target of halting the loss of biodiversity. Especially farmland, wetland and coastal habitats are in trouble, and fewer than one fifth (17%) of the EU's most important species and habitats are in good shape.

Applauding the Commission for this groundbreaking analysis, the RSPB and BirdLife International welcomed the report's special spotlight on the role of agriculture: "This report is further proof that the Common Agriculture Policy (CAP) remains a key threat to our wildlife," commented Dr Mark Avery, the RSPB's Director of Conservation.

"But agriculture isn't the only threat," continued Dr Avery. "The statistic that more than nine out of ten of threatened habitats in the UK are not in favourable condition is shocking and is a reminder that the government has to abide by its duty under European law to improve the fortunes for our special and threatened wildlife. This report highlights the impact of traditional threats, such as agriculture, habitat destruction and development, but new threats, such as climate change, are emerging rapidly. From previous research, we know that the legal protection of nature at a European level works spectacularly well. By improving the situation now for threatened habitats and species we will help them to be more robust in the face of future threats." 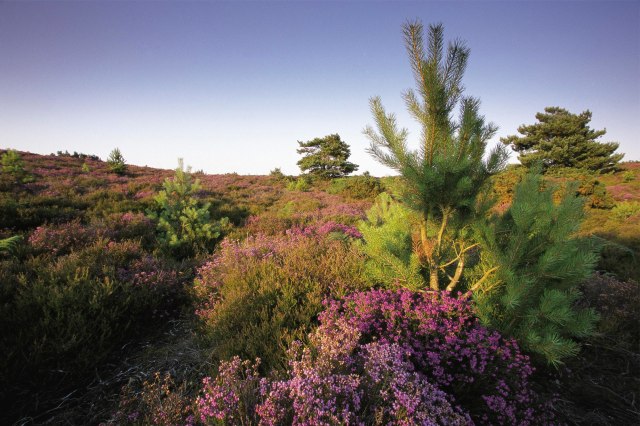 The Article 17 report indicates that only one of the UK's 14 grassland and heathland habitats on the directive are in favourable condition. Dr Avery added: "To meet our targets in future we need to: stop the rot by improving the condition of existing habitat; conserve the best sites through site protection and positive management; and re-create the rest. The habitats directive does a good job at protecting the best, but we now need to finish the job."

The UK has lost approximately three quarters of its former lowland heathland to forestry, agriculture, urban development and abandonment. In the UK, lowland heathland now only covers an area a third the size of Dorset, a shadow of its former extent. Even after these losses, the UK still has around one fifth of the world's lowland heathland. Dr Mark Avery added: "What lowland heathland is left is often in small patches, which are at risk from threats like scrub encroachment, agriculture, fires and disturbance to the wildlife. Managing these remnants sympathetically alongside the recreation of bigger sites reduces these threats and makes it easier to stop the rot."

The report said that the habitats associated with farming are in particularly poor condition compared to others (7% per cent compared to 21% being in favourable status respectively), with grasslands suffering most from intensification or abandonment.

"It is mainly the fault of national governments and their Agricultural Ministers that attempts to improve the situation have largely failed in the past," added Konstantin Kreiser, BirdLife International's EU Policy manager. "Under heavy lobby pressure they refuse to provide nature-friendly farmers with the required financial support; instead they promote agricultural intensification and the expansion of biofuels. However, the debate on a radical reform of the Common Agricultural Policy has now started, and this is a great, but maybe our last, chance to stabilise our rural environment."

Commenting on the overall findings of the report, the RSPB and BirdLife see it as "scandalous" that 17 years after adoption of the EU Habitats Directive a number of member sStates still claim not to know the status of their most important animal and plant species. On this, the Commission report especially blames Cyprus, Greece, Spain and Portugal, who indicated "unknown" for more than half of their species. BirdLife urges the Commission to take firm action so that these and other governments invest more in monitoring of nature and wildlife.

Of the nine countries with territory within the Atlantic biogeographical region, Germany with 29% has the largest extent of threatened habitats in favourable condition. Germany is followed by Portugal (21%), Denmark (19%), the Netherlands (8%), Ireland (6%), the UK (6%), Belgium (4%) and France (3%). No comparative data exists for Spain, which didn't report all of its statistics.

The EU Habitats Directive, together with the Birds Directive, adopted in 1992, obliges Member States to take measures to protect Europe’s animals and plants, and their habitats (more information at www.birdlife.org/eu/EU_policy/Birds_Habitats_Directives/index.html). Article 17 of the EU Habitats Directive requires Member States to report every six years about progress made; the long-awaited composite report published today by the European Commission is the first one of its kind and is based on the data submitted by Member States in 2007.