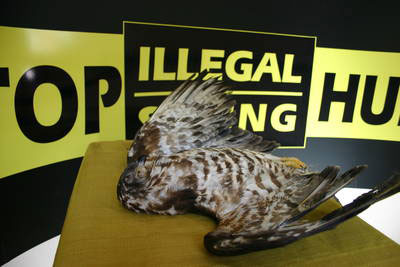 Wounded Honey Buzzard: one of three injured birds of prey reported to BirdLife Malta in the weeks preceeding the opening of the 2007 hunting season (photo: BirdLife Malta).

On the same day Malta's spring hunting season for birds begins, bird conservation organisations across Europe have united in protest against the Maltese government for allowing the practice to continue, despite ongoing legal and political action taken by the European Commission.

The European Partnership of BirdLife International - consisting of 42 separate national conservation organisations - have together urged the Maltese Prime Minister Dr Lawrence Gonzi to end spring hunting and "clamp down" on poaching.

The conservation groups argue that, since joining the EU in 2004, Malta has breached the European Birds Directive by allowing spring hunting of Turtle Dove and Quail. Spring hunting is prohibited by the Birds Directive in order to protect wild birds during their migration from Africa to breeding grounds in Europe.

This is the fourth consecutive breach of the EU law since Malta joined the Union in 2004.

Legal action by the European Commission against Malta began in June 2006, with a European Court case expected to start later this year. On 15th March 2007 the European Parliament adopted a strong resolution calling on Malta to end spring hunting and trapping of birds immediately.

"Malta is a vital stepping-stone for these birds on their exhausting journey northwards, hence this is not an issue just for Malta - it affects all European nations."

"Conservationists, citizens, organisations and governments across Europe have invested significant amounts of time and resources in protecting wild birds in their own countries. The fact that the Maltese government allows these birds to be killed during their journey to the breeding grounds is deeply shocking - particularly as this decision ignores the law and all scientific evidence and instead seems heavily influenced by upcoming elections."

"The Maltese hunters may not want to live up to their common responsibility as Europeans but the Maltese government should." said Kreiser.

This year - before the official opening of the season - the BirdLife Partner in Malta has already received reports of illegal shooting:

"Declining or endangered species continue to be shot illegally on a regular basis. Only last week a Pallid Harrier and a Purple Heron were found shot," said Joseph Mangion, President of BirdLife Malta. "With the European population of Pallid Harriers down to only a handful of birds, the actions of a single Maltese hunter could impact dramatically on the future of this species. This scenario is repeated for a wide range of threatened birds that are shot illegally on a regular basis here in Malta."

"BirdLife Malta and the whole European network of BirdLife International will continue to press Malta to stop spring hunting and to clamp down on poaching, otherwise the country risks not only a heavy fine from the European Court of Justice but also a further deterioration of its public reputation in the EU," added Konstantin Kreiser.