A Tawny Owl which became trapped in overhead phone lines has been rescued by firefighters.

Crows roused people in Menston, West Yorkshire, who then raised the alarm after they saw the trapped owl. Fire crews used an aerial platform to bring the "very distressed" bird to safety on Tuesday 21 May. 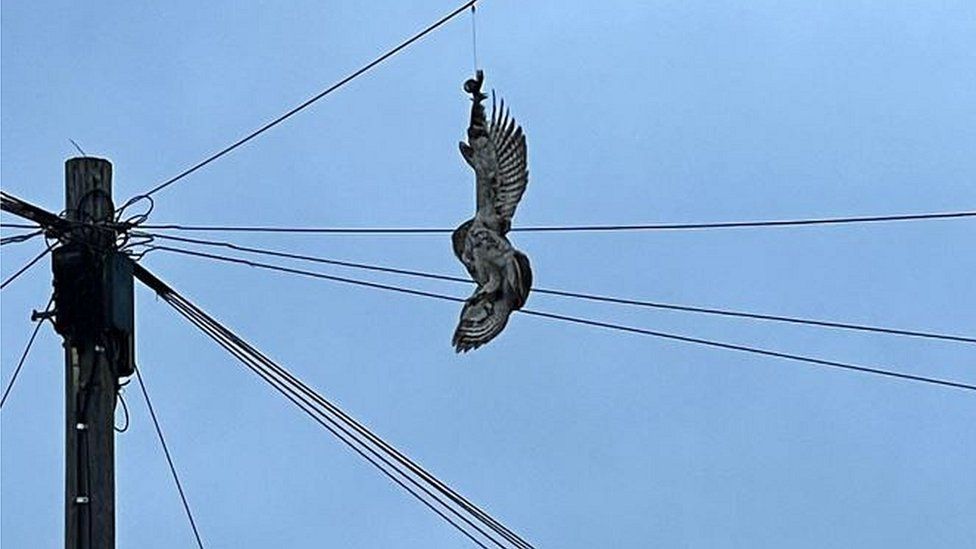 The released raptor, nicknamed Tony by rescuers, was taken to a vet where it will be rehabilitated, a fire service spokesperson said. Resident Michael Bowling said: "I got woken by crows making a right racket. I looked out the window to see the poor owl struggling on the line."

Mr Bowling said a neighbour had reported the trapped bird on a community Facebook page and a group member had called West Yorkshire Fire and Rescue Service.

Station manager Ronnie Goldwater said the Bradford site had received a call about the bird at 6.15 am. When the rescue crew arrived at the scene it was "very sad", he said. A crew member who reached the bird found it was "tethered to the phone line by an identity lanyard", said Mr Goldwater.

"It was so distressed and flapping about and had been like that for some time, but we wrapped a blanket around it and it went into a kind of torpor. It didn't damage its wing, goodness knows how."

The bird was taken to a vet by Vikki Clarke, a volunteer in animal rehabilitation who had joined the crew in the rescue. Mr Goldwater said: "We were so lucky to have Vikki with us and then the vet she took the bird to was also a falconer, how about that for luck? We go to death and destruction most of the time, so it's good to get a happy ending."