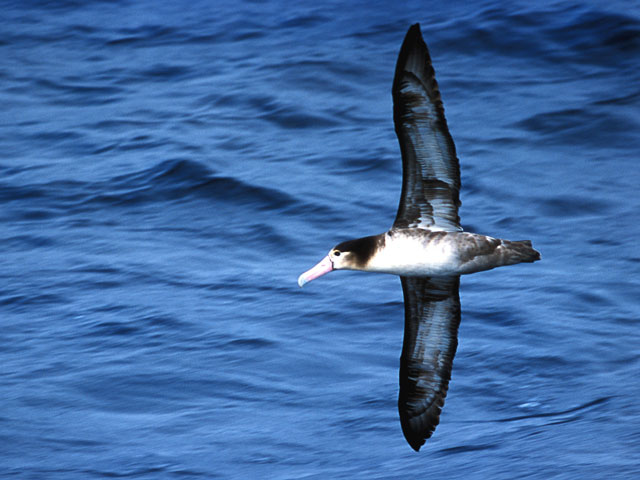 An albatross appearance in European waters is cause for much excitement now, but there is evidence that such events might have been routine more than two million years ago. They occurred widely and nested in the North Atlantic.

The onset of the Ice Age is an obvious likely cause of their disappearance. One assumption might be that there was a southwards retreat - and then, because of the shortage of strong winds in the ocean's equatorial region, they were unable to return to the Northern Hemisphere after the climate re-warmed. However, a different scenario has taken shape following new studies - reported in the current edition of Ibis (Vol 149, number 3), the British Ornithologists' Union journal - of the fossilised albatross remains found in Upper Pliocene sediments (around 5-3m years old) in Suffolk.

Known as the "English fossil albatross" and given the scientific name "anglica", the bird involved was similar in size to the 11ft-wingspan, New Zealand-nesting Royal Albatross, the range of which extends from south of Australia eastwards across the Pacific's bottom end to the south-west Atlantic north to southern Brazil. But the research of palaeontologist Cyril Walker, Robert Nudd of Leeds University's Faculty of Biology and Gareth Dyke of Dublin University's School of Biology and Environmental Science suggest it is not closely related to any of the southern ocean species. Instead comparisons of measurements of the Suffolk bones with those of existing species have linked it to the Phoebastria genus, consisting of Short-tailed Albatross, Black-footed Albatross and Laysan Albatrosses, which occur in the North Pacific, cut off from the North Atlantic by the Americas.

To explain in more detail, they noted that the ratio of ulna length/tarsometatarsus length was significantly lower in Phoebastria species than in those of Diomedea (the great albatrosses) or Thalassarche (the mollymawks, like Black-browed and Yellow-nosed). "Anglica's" ulna length/tarsometatarsus length was found to fall within the range of Phoebastria - but was outside the ranges of Diomedea and Thalassarche.

This suggests Phoebastria albatrosses used to fly between the North Pacific and North Atlantic via the sea gulf that separated North and South America, before they were joined up by Central America's formation five million years ago.

Commenting on their Ibis finding, Cyril Walker, now retired from the Department of Palaeontology at London's Natural History Museum, said: "The end of this link between two oceans not only isolated 'anglica' from the North Pacific albatrosses, it changed the climate and currents of its habitat." Oceanographers, he explained, felt the joining up of North and South America - which stopped tropical water flowing from the Pacific into the Atlantic - set the scene for the Ice Age more than two million years later. "While Phoebastria albatrosses continued in the Pacific after North and South America became linked, it appears their Atlantic cousins couldn't cope with the resulting changes to their ocean. Extinctions usually follow chains of events and the closure of the seaway to the Pacific seems to have been part and parcel of the process leading to the disappearance of these albatrosses. We don't know exactly what happened but possibly resulting changes to ocean currents impacted on their food supply - which would have had a disastrous effect on them."

The team's report in Ibis concludes that the "English fossil albatross" was closely related to the North Pacific's existing Short-tailed Albatross and should have the scientific name Phoebastria anglica.

Phoebastria-like albatrosses are believed to have occurred widely in the North Atlantic. "Anglica" has also been recognised among five fossil albatross species recorded from phosphate-mined material at Lee Creek, North Carolina and fossil evidence has emerged, additionally, from Florida. The most recent record, dated in the mid-Pleistocene epoch, about 800,000 years ago, was from the island of Bermuda, thought - pointed out Cyril Walker - to have been a colony site.