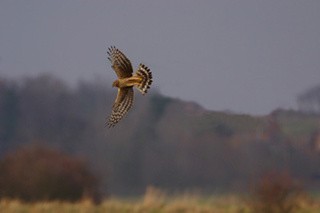 Four young Hen Harriers - the most endangered bird of prey in England - have successfully flown from a nest in the North Pennines, the RSPB announced today.

The pair of Hen Harriers, one of England's rarest and most spectacular birds, has nested at a remote upland site on the RSPB's Geltsdale nature reserve, which covers a large area of moorland in Cumbria and Northumberland.

Staff and volunteers from the RSPB and from English Nature's Hen Harrier recovery project have kept a round-the-clock guard on the nest of the rare birds since they arrived in April.

Only a handful of Hen Harriers nest in England, usually on moorland, and the only regular breeding areas are in the North Pennines and in the Forest of Bowland in Lancashire. In 2002, there were just seven successful breeding females in England, which raised twenty-two chicks.

Dave Barrett, RSPB North of England reserves manager, said: "It is great news that these magnificent birds have successfully nested at the Geltsdale reserve. The English Hen Harrier population is perilously low, so every chick that successfully fledges is precious and we are delighted to have four new recruits to the population. This nest was only successful because of a hugely labour intensive nest protection operation and we are grateful to everyone who put in such long hours in all weathers to help safeguard the nest, eggs and chicks."

RSPB Regional Director, Andy Bunten, added: "The absence of Hen Harriers from wide swathes of upland England is a national disgrace. It's high time we reached a situation where we no longer have to guard harrier nests 24 hours a day, where harriers can nest in England without constant danger of persecution, and members of the public can have opportunities to enjoy watching these spectacular birds."

The RSPB and English Nature will be following the progress of the birds closely now that they have left the nest, and hope that they will eventually nest and rear young themselves. The chicks from the Geltsdale nest - 2 males and 2 females - have been wing and radio tagged for identification purposes and their movements will be tracked by the English Nature project team during the next few months.

Illegal killing is the principal reason why Hen Harriers are absent from almost all areas of suitable moorland habitat in the north of England and they are one of the most persecuted birds in the UK.

Hen Harriers, along with all other birds of prey, are fully protected by UK law and anyone disturbing, killing, injuring or taking birds, their nests or eggs can face a fine of up to £5,000 for each incident or six months in prison.

This spring, English Nature and the RSPB also expressed concern about the future of England's Hen Harriers following the burning of heather moorland around several known Hen Harrier sites.