A project is stopping deforestation and community exploitation in Sierra Leone through the power of cocoa.

Set to the whooping sounds of hornbills and other species, small-scale farmers, the Goleagorbu, have grown cocoa in the Gola Rainforest, Sierra Leone, for generations, although until recently 24,000 farmers in the area didn't even know what chocolate was. In the past, their cocoa was exported in bulk commodity supply chains – meaning they had no idea where their beans ended up, let alone ever tasting the final luxury global product (of which they would receive a disgraceful 3-6 per cent of a bar's value). Not only that, but the cocoa production was not sustainable and was contributing to a catastrophic loss of rainforest.

The Upper Guinean Tropical Rainforest (which borders Liberia and Sierra Leone, two of the poorest countries in the world) used to be full of wildlife. Exploitation of this lush forest has led to vast tracts being lost to intensive agriculture (including cash crops like cocoa), mining and logging, bringing serious threats to species like Pygmy Hippopotamus, Western Chimpanzee and White-necked Rockfowl, not to mention the loss of the livelihoods of the people who rely on the forest. 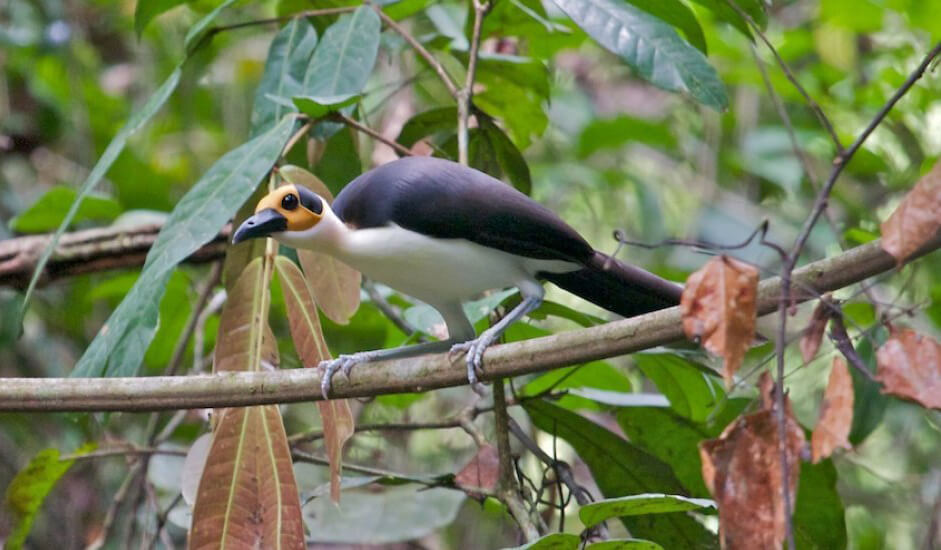 White-necked Rockfowl is one of many species that will benefit from sustainable cocoa production (Michael Andersen).

However, in the largest remaining fragment, a flagship conservation effort has been set up: the Gola Rainforest National Park (GRNP). The park was established seven years ago in a partnership between the Conservation Society of Sierra Leone (BirdLife Partner), Sierra Leone's government, BirdLife International, the RSPB and 140,000 Goleagorbu living at the Gola forest edge. How could the protection of the rainforest become a serious business for the Goleagorbu people? One of the solutions has been found in chocolate.

Across many parts of the world there has been a lack of investment in sustainable cocoa. This not only perpetuates high levels of poverty but also drives tropical forest loss, as farmers slash-and-burn new areas for planting more cocoa to support themselves. This, along with the development of sun-tolerant cocoa hybrids – which allow for more intensive, full-sun plantations – has driven clearance of an estimated 2.3 million hectares of tropical forest between 1988 and 2007 in the main West African cocoa-growing countries. The ultimate driver for this is our love of chocolate.

In 2015, the partnership started to build a cocoa business with the ability to protect the Gola Rainforest. Cocoa farmers on the forest-edge, like Gbessay and Bockerie, came together to form the Goleagorbu Cocoa Producers Organization (GCPO), the foundation of the business. It's founded on democratic principles where farmers register, pay subscription fees and elect leaders to manage their pot of money. Together, we have been investing in forest-friendly cocoa that will bring long-term returns to the Goleagorbu people.

The Gola Cocoa team have supported farmers with training in a technique called agroforestry, whereby cocoa trees are strategically planted alongside leafy shade trees which birds love, nitrogen-fixing trees for soil fertility, bushes of pineapples and chilli peppers, and tendrils of maize. From these forest-edge smallholdings, the Goleagorbu farmers take the cocoa and process in groups, then together take cocoa to the new Buying Centres.

Each centre is equipped with scales, a receipt book and a published price for cocoa per kilo. It may sound simple but farmers had not seen this level of transparency before. As Juma Koroma, one of the treasurers at GCPO, explains: "I used to sell cocoa to other traders in the area. Traders would often cheat us; they never allowed the scales to face me, so I couldn't see the weight of my cocoa and had no idea what price I should expect. I have now learnt to read the scales myself and know what I deserve for my cocoa."

In the village of Lalehun, members have already saved enough to start a credit scheme, which makes a small amount of interest to invest back into the organisation. The Gola Cocoa team have supported the elected leaders to become strong representatives, and 27 per cent of them are women. A programme of training for youth Master Farmers also encourages knowledge to be shared with future generations. 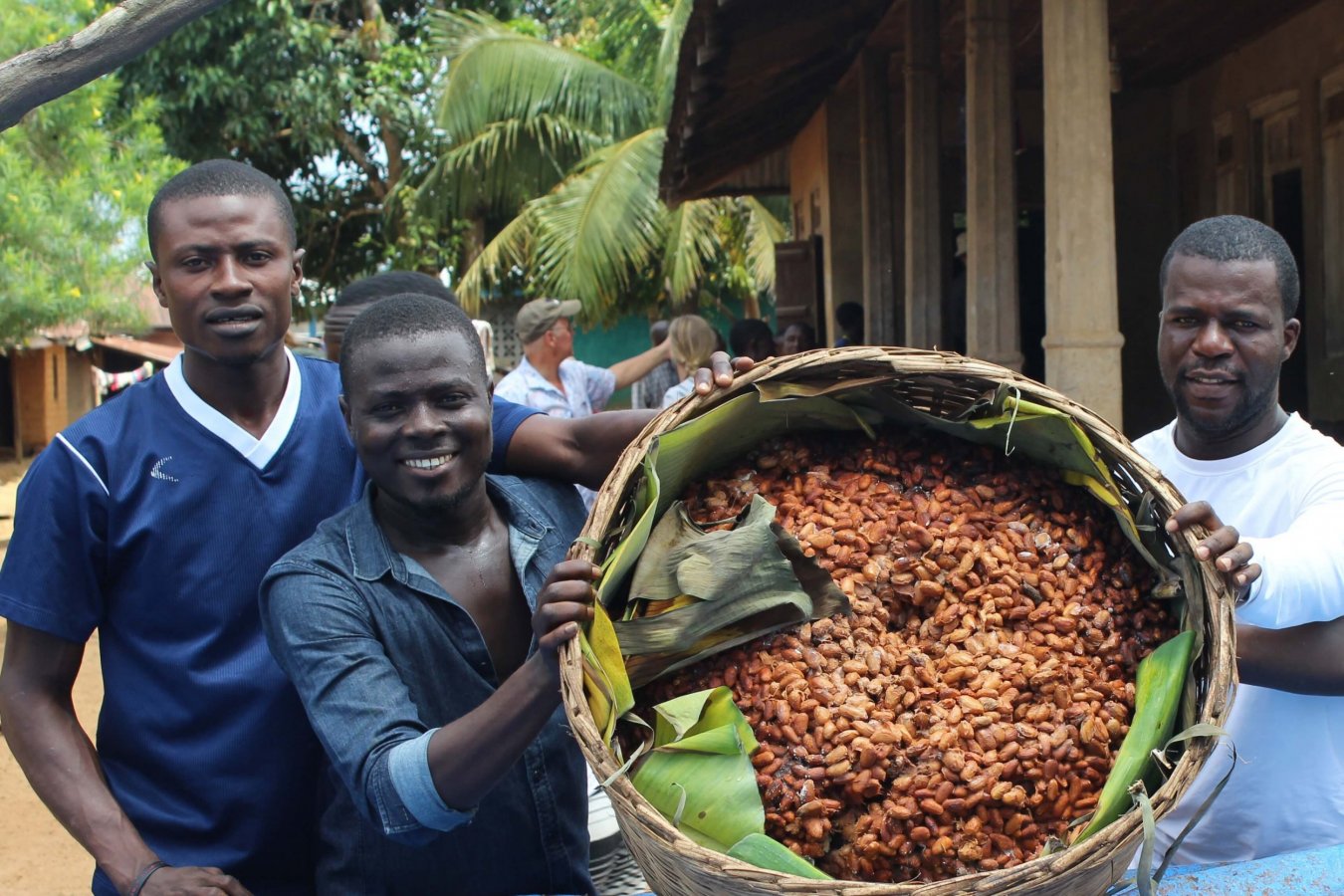 Globally, industry is also waking up to cocoa-driven deforestation and recent announcements from the 12 biggest cocoa companies herald a commitment to 'zero deforestation cocoa supply chains'. In a similar vein, the work at Gola is also a flagship for an exciting new venture, Trillion Trees (with WCS and WWF), that boldly aims to end deforestation by 2050, partly by scaling-up proven successful projects like this to other parts of the tropics.

In Gola, the next step for the farmers is to sell their quality Gola Rainforest Cocoa to higher-value markets around the world – which Twin (a UK NGO and trader) are helping with.

What is the next step in making this business work? The development of a Gola Rainforest Chocolate bar. "We're exploring with chocolate makers what's possible for our own-brand bar," says Alice Ward-Francis, Senior Forests Programme Officer at BirdLife. "We want to show the world that Sierra Leonean cocoa can taste amazing while protecting rainforest."

Some of the first batch of pilot bars were taken by the RSPB for the Goleagorbu farmers to try chocolate for the first time. Aminata Berewa, supervisor of the cocoa team, remembers: "The look on their faces was total surprise! They enjoyed tasting it, discovering the flavour, especially knowing it was their own cocoa in the bar." With deforestation reduced and 2,000 people empowered, the taste is doubly delicious.