A pair of White-tailed Eagles has nested in Helsinki city centre this spring, with three chicks recently hatching.

The birds' appearance and decision to nest in the capital of Finland has surprised many – there are no records of White-tailed Eagle ever nesting in such an urban environment, in Scandinavia or the rest of Europe. White-tailed Eagles typically nest further away from settlements, having recovered in Finland following a population crash in the 1970s. 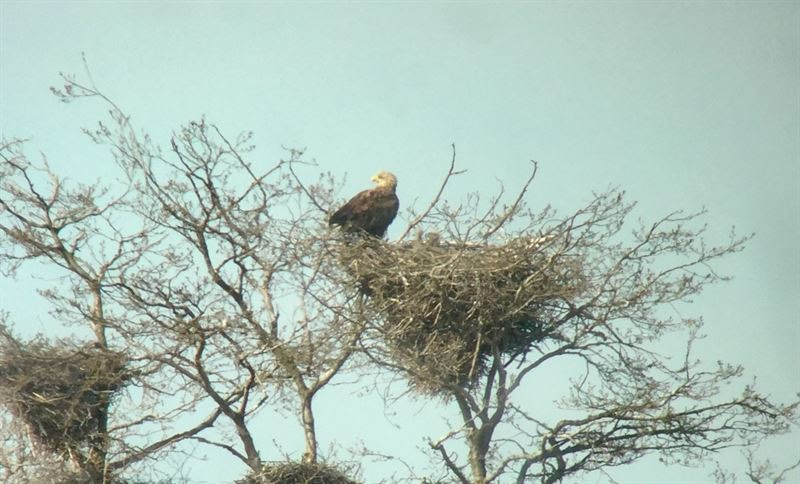 The White-tailed Eagle pair in Helsinki have three young chicks in their nest (City of Helsinki).

Vanhankaupunginlahti nature reserve is the site in question, located a mere 5 km away from Helsinki city centre. The pair of eagles, named Nadi and Amalia, have built their eyrie in an old Grey Heron nest on the island of Loppi. The three chicks have been fed with a supply of bream and other fish caught from nearby waterbodies.

There are approximately 150 species that nest annually in Helsinki, accounting for two thirds of all the bird species that do so in Finland. Another raptor success story in the city is Northern Goshawk, with a rapid population growth leading to Helsinki now boasting the densest population in Finland.

Anni Sinnemäki, deptuty mayor of Helsinki, said: "Helsinki is a growing city that is constantly building new housing. It is an important goal for us to ensure that the city grows without compromising its extensive natural areas and biodiversity. For me, the Vanhankaupunginlahti area is an important place for recreation and enjoying nature, as it is for countless other residents of Helsinki."