A Sunderland resident has pleaded guilty to four charges of illegally taking Ring Ouzels from the wild in 2013.

Appearing at Sunderland Magistrates Court yesterday (Tuesday 13 October), Bobby Thompson, of Houghton-le-Spring, was convicted under the 1981 Wildlife and Countryside Act and given a 12-month conditional discharge and ordered to forfeit all diaries, maps and books seized before his arrest. He was also ordered to pay £165 costs. The maximum sentence for illegal possession of a wild bird is six months' imprisonment and/or an unlimited fine.

Thompson was originally charged after a search at his home by Northumbria Police — assisted by the RSPB and RSPCA — in July 2014, where five Ring Ouzels were discovered in aviaries in his garden. Diaries seized by the police also linked Thompson to wild Ring Ouzel nests on Stanhope Moor in County Durham in 2012 and 2013. 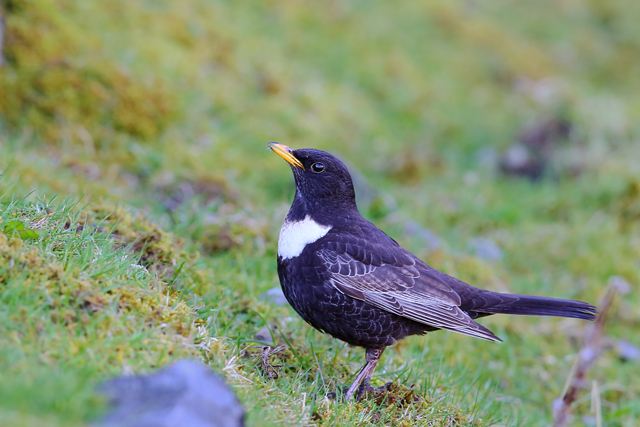 In 2012, a licensed bird ringer monitoring Ring Ouzel nests at Stanhope Moor was surprised to discover that three ouzel chicks in a nest had been 'close ringed'. These leg rings are normally fitted on aviary-bred birds and are very different to those used to monitor wild birds under licence in the British Trust for Ornithology Ringing Scheme.

The ringer reported this information to the RSPB Investigations Unit who suspected that someone was ringing wild chicks in the nest in an attempt to illegally pass them off as captive-bred birds. A short time later, the ringer returned to the nest on the moor to discover the chicks had vanished. Although these three chicks were never found, some of the Ring Ouzels discovered at Thompson's property were wearing close rings bearing serial numbers in the same sequence as those that had disappeared from the Stanhope Moor nest.

Ring Ouzel is a scarce summer visitor to the uplands of the UK, spending the winter in Africa. They have suffered steep population declines in recent years and are red-listed as a species of conservation concern. The Ouzels seized by police in Durham were subsequently released at Dungeness RSPB reserve, Kent, to allow them to migrate to Africa for the winter.

Alan Firth, RSPB Investigations Officer, said: "We are pleased with this conviction as Ring Ouzels are under enough pressure without being illegally taken from the wild. These wonderful little birds are an integral part of our uplands during the summer months and if they are to have any chance of recovery in the UK, then we need to deter illegal activity by holding the guilty accountable for their actions."