Almost 100 vultures have been found dead or dying as part of a suspected poisoning incident in the Spanish region of Castilla y León.

After a report of dozens of dead vultures, authorities arrived at the scene and counted up a total of 56 deceased birds – 54 were Griffon Vultures, with singles of Cinereous Vulture and Black Kite also among the victims.

A further 41 live birds (38 Griffon and three Cinereous Vultures) were recovered, but many were in such poor condition that the prognosis looks bleak.

The birds had consumed the remains of four sheep that had died next to a cornfield, with authorities considering all possibilities for the event – including the likelihood this was intentional, targeting predators or even vultures. Another possibility is that the poisoning comes from an agricultural treatment that may have poisoned the sheep, which then affected the vultures feeding on their carcasses. Blood and tissue samples from the carrion and the dead animals have been sent to the Toxicology and Forensic Veterinary Service of the Veterinary Faculty of the University of Murcia to help determine the substances used.

Emergency treatment was also given to those vultures that had not yet succumbed by vets from Junta de Castilla y León (JCYL), in the hope of saving as many birds as possible. 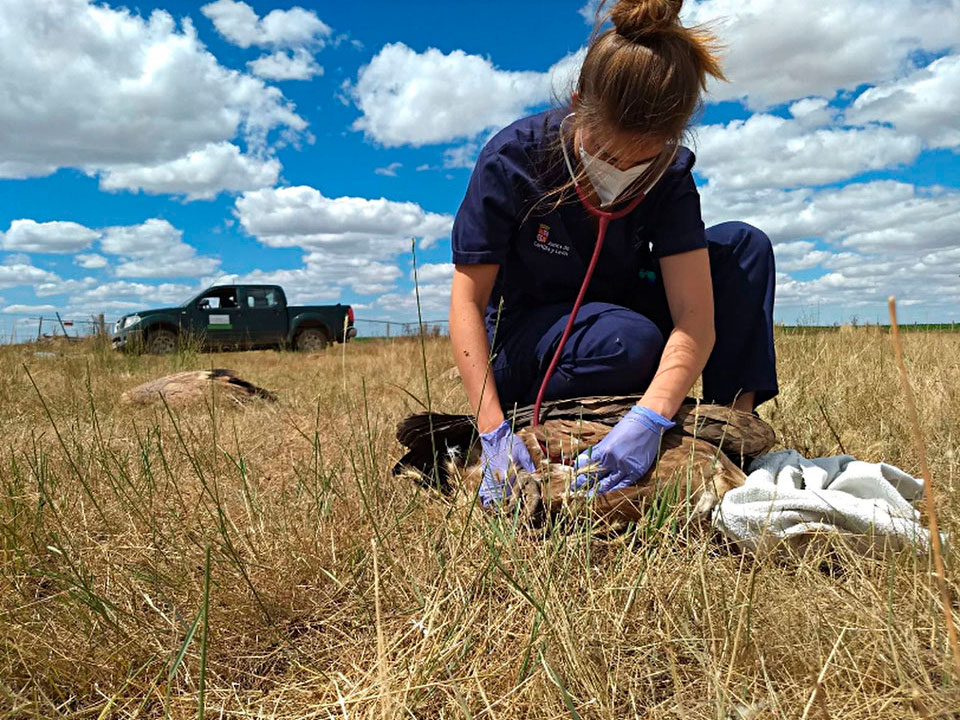 A veterinarian tends to one of the affected vultures (JCYL).

Spain is home to 90% of the European populations of these protected species, with around 35,000 pairs of Griffon and 2,500 pairs of Cinereous Vultures.

Poison – usually put out to kill carnivores, not vultures, which are collateral victims of this illegal practice – is the main threat to vultures worldwide, according to the Vulture Multi-species Action Plan.

Spain is no exception, with poisoning causing fatalities in vultures and other birds of prey on an annual basis. Between 1992 and 2017, a total of 1,757 Griffon Vultures were recorded as poisoned in Spain, with 624 Cinereous, 325 Egyptian and 48 Bearded Vultures all suffering the same fate over the 25-year period. With many poisoning incidents likely going unreported, the true figure is feared to be considerably higher.