Developers of a revolutionary gadget that could virtually eliminate seabird deaths in pelagic longline fishing are urgently seeking help to reach their crowd-funding target. Developers of the Hookpod need to raise the final £15,500 of their £100,000 target in the next five days to enable the essential new device to go into commercial-scale trials and save the lives of seabirds.

So far more than £84,000 has been pledged on the Kickstarter website, but the remaining funding must be secured by 2 am on Monday 25 August — the fundraising time 'window' is fixed, and if the target is not fully achieved by then, no pledges are taken and no money changes hands.

Every £5 pledged will deliver one Hookpod, which will go on saving albatrosses and petrels for between three and five years, but donors can pledge anything from £1 to £5,000.

Commercial longline fisheries are currently responsible for the deaths of an estimated 100,000 albatrosses and countless other seabirds each year. The scale and impact of the bycatch is so severe that several species are threatened with extinction, but at last a solution is available. 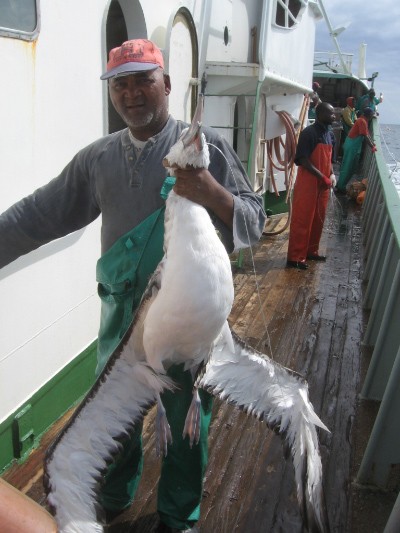 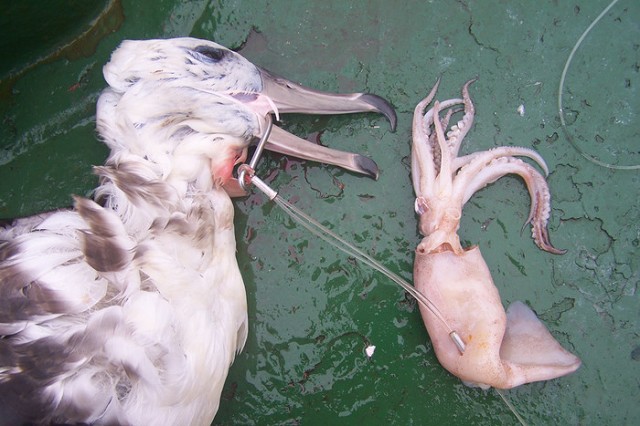 The aim of the Hookpod is to reduce the frequency of horrendous scenes such as these (Photos: Hookpod).

The Hookpod prevents birds from being caught as the barb of the hook is protected until it sinks to a level that albatrosses cannot reach. At this depth, a pressure switch opens the pod and the hook holding the bait is released. The pod is also weighted for a quick descent rate.

The ingenious design has advantages for the fishing industry as well as the birds. The Hookpod is cost-efficient, reduces bait loss and eliminates the need for line weighting. Long lasting and reusable, it also contains an LED light with replaceable batteries that attracts fish to the line, eliminating the current expensive use of light sticks by fishermen. Importantly for the industry, tests have shown it can increase fish catch.

This is a British invention that will solve the global problem of some seabird declines. The Hookpod has been designed and developed by a small UK company called Fishtek, based in Totnes, Devon, with input and support from RSPB, BirdLife International and the Albatross Task Force. It has been tested at sea with fishermen and governments in Australia, Chile, Japan, South Africa and Brazil. 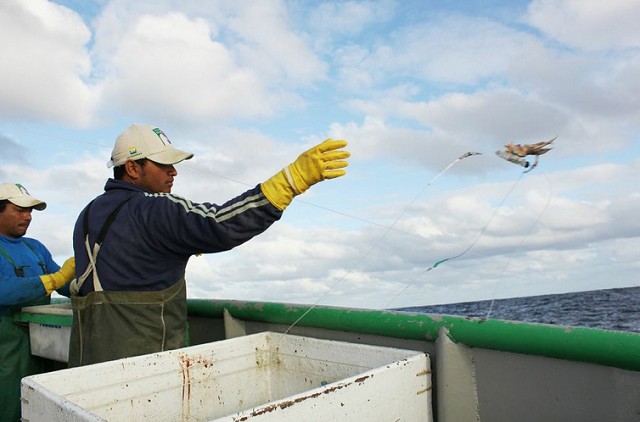 The Hookpod design in use on a fishing boat (Photo: Hookpod).

Hookpod Ltd aims to commence production in 2015. The plan is to produce 20,000 Hookpods to 'seed' the fishing industry around the world and to prove to fishermen that the device works. They will have to purchase Hookpods but the investment will be more than covered by efficiencies and cost savings. Many fishing vessels purchase one new lightstick per hook per set, which they use to attract fish to the hooks in the darkness at depth. Hookpods provide better illumination than a lightstick, with no need for replacement or waste, and will make a considerable cost saving for fishermen. Ease of operation also speeds up the setting process each time lines are cast.

With the help of birders around the world, the declines of many species of albatrosses and petrels can be stopped — but time runs out to do so at 2am on Monday 25 August.

Pledge your support now at www.kickstarter.com/projects/hookpod/hookpod-saving-the-albatross-from-extinction.

Overnight, donations passed the crucial £100,000 mark. However, you can continue to donate to Hookpod via the link above — every little helps!