Did our butterflies feel the heat?

Sir David Attenborough, Butterfly Conservation President, is urging the public to take part in the world's biggest butterfly count to help find out whether our species were affected by this year's record-breaking weather. 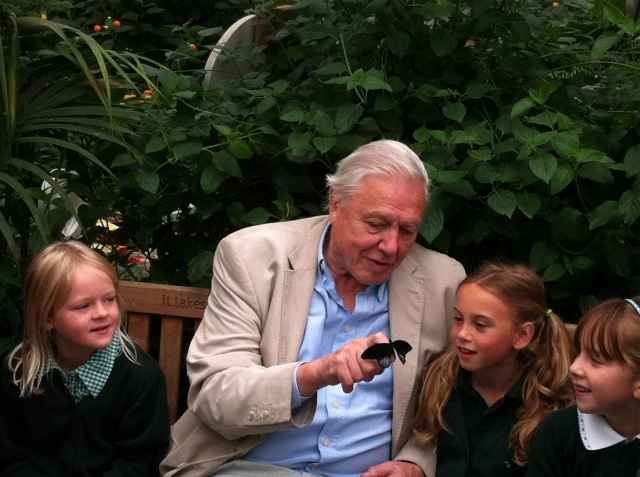 The spring of 2011 has been one of the hottest on record with severe droughts in some areas, and may have had a huge impact on our native species, so the results of Butterfly Conservation's Big Butterfly Count are more important than ever. Butterflies are key indicators of the health of our environment, and taking part in the count will provide crucial information that could help secure the long-term future of these threatened insects.

The Big Butterfly Count runs from 16–31 July. Taking part is easy — find a sunny place and spend just 15 minutes counting every butterfly seen and then submit sightings online at www.bigbutterflycount.org. For the second year running, the Big Butterfly Count is taking place in partnership with Marks & Spencer as part of its Plan A commitment to be the world's most sustainable major retailer by 2015.

Sir David said: "Butterflies are one of the stars of the British countryside. Summer just wouldn't be summer without them. But they continue to be in long-term decline. It's more vital than ever to know where they can be found and in what numbers. Now you can play your part in helping to save them by getting involved in the Big Butterfly Count." Taking part is easy and great fun. By recording butterflies in a 15-minute count, you can make a real contribution to our understanding of these beautiful creatures. I urge everyone, young and old, to take part in the Big Butterfly Count to help us assess the fortunes of these bewitching creatures. Your contribution will make a real difference."

Last year's count saw more than 10,000 people count 189,000 butterflies. The data provided vital information — revealing that Britain's most common butterfly, the Meadow Brown, had suffered a terrible year, but that the Common Blue had enjoyed a fantastic summer, outshining many of our other butterfly species. This year's results will help reveal the impact of the record-breaking spring weather, which saw drought conditions declared in many areas of southern Britain and Wales. The hot weather prompted many species to emerge earlier than ever before, and the results of the count will help reveal whether our butterflies are fighting back after years of long-term decline, or suffering starvation as the plants they feed on wilt and die in the drought.

The count will also allow conservationists to track the progress of two much-loved garden butterflies that have suffered worrying declines in recent years. The Small Tortoiseshell has seen its population plummet by almost 70% over the last decade and the dramatically coloured Peacock has also suffered a steep population slump.

The count is concentrating on 19 widespread species of butterflies and including a couple of colourful day-flying moths, all of which can be identified from a downloadable chart. Last year, Butterfly Conservation and M&S launched a partnership campaign targeting both the retailer's customers and farmers to help raise awareness of the importance of butterflies and moths, and this year it is being extended to also reach schoolchildren and their parents. M&S and Butterfly Conservation want to encourage primary school students and their parents to join in this year's count and have provided free activity packs to over 1,500 schools to help educate children about butterflies. These are also available for families via the Big Butterfly Count website.

Richard Gillies, M&S Director of Plan A, said: "We are really excited about partnering with Butterfly Conservation for the second year running. At M&S we want to lead the way in making a positive contribution to the environment and this year we're not only encouraging all our farmers, customers and employees to take part in the Big Butterfly Count, but also helping schoolchildren and their parents to get involved. We want to make it the biggest count yet — it should be great fun as well as providing vital information about the health of the UK's butterfly population."

Big Butterfly Count 2010 revealed that the Small White and Large White were the most common butterflies, closely followed by the Gatekeeper. The Meadow Brown, typically Britain's most abundant butterfly, came only fourth, a long way behind the top three, when it would normally greatly outnumber Gatekeepers.

2010 turned out to be the worst year on record for the Meadow Brown in the UK. In contrast the Common Blue had a fantastic summer — its second best since the 1970s. This was reflected in its strong performance in the Big Butterfly Count results where it finished in 5th place. There was also some evidence of a slight recovery of the much-beleaguered Small Tortoiseshell (which came 9th overall).