December 2022 issue of Birdwatch out now 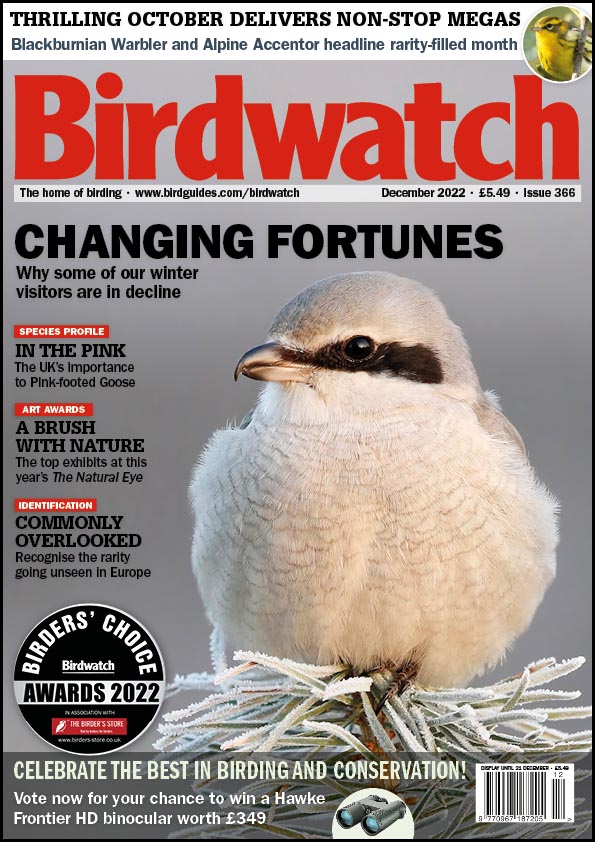 You can now read the December 2022 issue of Birdwatch as either a digital download or paper magazine. The paper magazine is available in the shops from Thursday [24 November] – or you can order online.

Which of our favourite winter visitors appearing in diminishing numbers – and why? From Great Grey Shrike to Smew, David Campbell ponders the changing fortunes of many cold-season specialities in the December issue.

One species that has fared well is Pink-footed Goose. With spectacular flocks gathering on our shores each autumn, Pink-feet enliven the winter days with their wink-wink calls for many British birders. WWT's Kane Brides profiles the species.

Now in its eighth year, the Birders' Choice Awards is back! Who are the heroes and the villains of conservation? What was this year's outstanding rarity? Tell us your views on the best and worst in birding for your chance to win a Hawke Frontier HDX 8x42 binocular worth £349.

Gull flocks will be building up at your local hot-spots at the moment, among which will be the often-overlooked Common Gull – but this species is well worth scrutinising closely in the hope of finding a rare visitor from Siberia. Jamie Partridge provides detailed ID tips you need to recognise the subspecies heinei, which is likely to be heavily under-recorded in Britain due to a lack of identification awareness.

Also this month, Mike Alibone reports back on this year's The Natural Eye art exhibition in London, where the prestigiuous Birdwatch and Swarovski Optik Artist of the Year was announced, and the World Land Trust details a new appeal to protect precious forest, along with its rare and restricted-range wildlife, at Mount Moco in Angola.

The December issue also includes exhaustive round-ups of an exceptional October for American landbirds across Britain, Ireland and the wider Western Palearctic.

December's digital edition has lots of bonus content, including:

•    Video of Smew and Great Grey Shrike;
•    Film of the Scilly Blackburnian Warbler;
•    Recordings of Pink-footed Goose;
•    Footage of the Suffolk Alpine Accentor;
•    Sound recordings of Spotted Redshank;
•    Film of rarities and scarcities from Britain, Ireland and the wider Western Palearctic.