A young Irish Golden Eagle has been found poisoned on the Sligo/Leitrim border at Truskmore Mountain. The 10-month-old eagle chick was born and reared in a Donegal eyrie in 2009. The bird had spent the last four months wandering the beautiful mountains above Glencar Waterfall, Lough Gill and Gleniff. 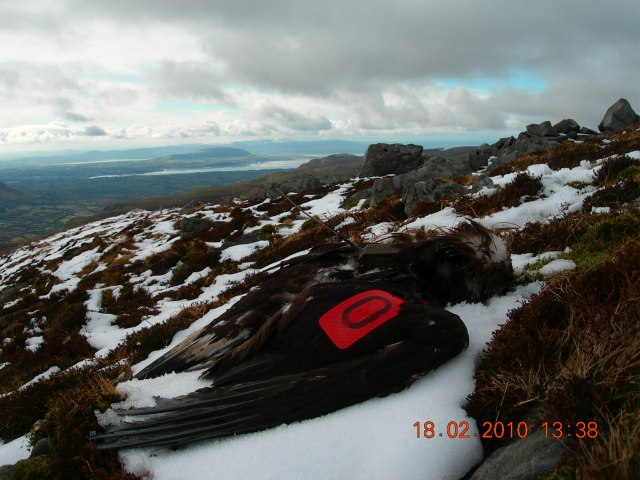 The bird was tracked and found using a Global Positioning System satellite transmitter fitted on its back. The corpse, recovered on the 18th February 2010, was just inside the County Leitrim border. A post mortem carried out by the Regional Veterinary Laboratory in Rathcormack, Sligo revealed that the young male was in excellent condition prior to its death. Toxicology analysis, carried out at the Ashtown Food Research Centre, Dublin, prove that the eagle was poisoned by Nitroxynil poured over the fleece of a dead newborn or aborted lamb. Gardaí in Sligo Town have begun their investigation.

This male eagle was named Conall, after "Tír Conall" — the Irish name for Donegal. Local people and children in Donegal, Sligo and Leitrim had been watching and following its regular movements on the project website. 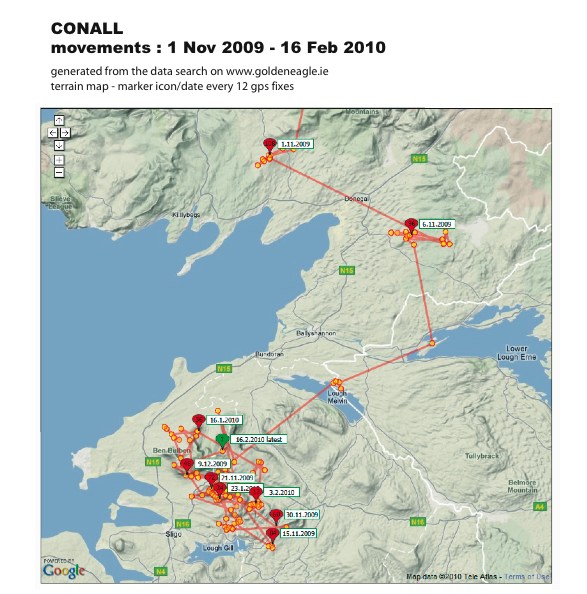 Prior to the 2009 lambing season another satellite-tagged Golden Eagle was found poisoned with Paraquat on 19th February 2009 in West Donegal. The loss of up to 10% of Irish Golden Eagle population within a year suggests that the Golden Eagle Project could fail, unless the unlawful use of toxins by a small percentage of farmers ceases. In total, nine White-tailed Eagles, Golden Eagles and Red Kites have been confirmed poisoned in Ireland over the last two and a half years. Recent monitoring by the Golden Eagle Trust proves that poisons, such as Alphachloralose, Carbofuran, Paraquat and Nitroxynil, have been used illegally in Munster, Ulster, Leinster and now Connaught.

The Golden Eagle Trust believes that over 95% of landowners across Ireland do not use poison. It is also clear from the 11,000 comments on the Golden Eagle Trust's anti-poisoning petition (see www.goldeneagle.ie), that the illegal use of poisons is condemned across both rural and urban Ireland. The Golden Eagle Trust lodged a formal complaint with the European Union in late 2009 concerning the failure of the Irish Government to implement legislation protecting Ireland's rare scavenging birds of prey.

Sadly much good work in educating farmers has been undone by the Irish Farmers Journal. A feature advised sheep farmers that "alphachloralose...is mixed with mincemeat and fat and placed alongside a fresh stillborn lamb or even a fresh afterbirth." This appalling advice on the reckless use of poison is indicative of a disregard for regulations within a small sector of the agricultural community and more crucially within the main weekly voice of Irish farming.

Lorcán O'Toole from the Golden Eagle Trust said: "This issue is about the illegal use of poison within Irish farming. We believe the few hundred farmers using poison illegally are at variance with the huge environmental advances Irish farming has undergone over the last ten years. We have always fully acknowledged the support and co-operation of the sheep farming community in the Northwest and continue to do so. But unfortunately the poisoning of this Golden Eagle undermines the image of Irish food and weakens the potential for local tourism and damages the fragile rural economy in the Northwest, we believe. Increasingly, farmers in Ireland will look for support from the ordinary Irish consumer to support their efforts for more sustainable prices for farm produce and in maintaining the crucial farming presence in rural Ireland after pending reforms to the EU's Common Agricultural Policy. Farmers need to question whether the actions of a tiny minority could undermine that consumer support."

John Cromie of BirdWatch Ireland commented: "News of the loss to indiscriminate and illegal poisoning of one of the first native-bred Golden Eagle's has been heartbreaking, both for the reintroduction project team and for the highly supportive local community in County Donegal. All the more depressing is the fact that this young eagle was found to be in excellent condition, having survived a particularly harsh first winter. One can only hope that the public anger being expressed over this sad event will ensure that the barbaric practice, by a tiny minority of farmers, of leaving out meat-based poisons, is finally eliminated in Ireland. "

Nonetheless, with up to half-a-dozen Golden Eagle territories now well established in the northwest, there is still grounds for optimism about the long-term success of this pioneering reintroduction project.