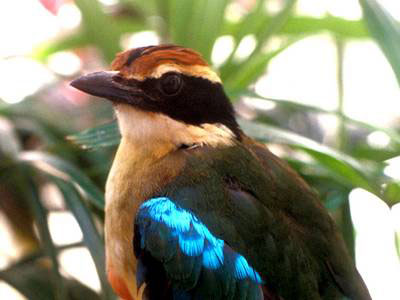 The future of the Fairy Pitta - among Asia's most beautiful and enigmatic birds- is threatened by the construction of a dam that would flood 422 hectares of its forest habitat resulting in the destruction of a large part of the most important breeding area in the region.

The Hushan Dam Project, proposed for Taiwan's Yunlin County, is the latest in a series of threats to the Huben-Hushan area which is listed as an Important Bird Area (IBA) by BirdLife International on account of Fairy Pitta Pitta nympha and five species found only on Taiwan Island. 150 Fairy Pitta are known to breed in the Huben-Hushan IBA during summer months, making it a site of international importance for the long term survival of this globally threatened species. Fairy Pitta is listed as Vulnerable by BirdLife on account of recent global declines owing mainly to extensive deforestation in its breeding range across other parts of China and Japan.

"It is a fact that the forests within the Huben-Hushan IBA, where the dam has been planned, support the largest known breeding population of Fairy Pitta anywhere in the world," said Dr Mike Rands, Chief Executive of BirdLife International. "This makes the protection of this habitat a global issue, about which we express great concern."

The IBA also provides habitat for other important species including the Taiwan Partridge Arborophila crudigularis and Swinhoe's Pheasant Lophura swinhoii - both endemic to the island.

The Huben-Hushan IBA has faced previous threats, most significantly from gravel extraction, an issue which WBFT, BirdLife International and local environmentalists successfully campaigned against, and halted, in 2000. The organisations at the time applauded the hard-line stance of the Taiwanese authorities on the issue. BirdLife and WBFT join others locally in continuing to appeal that suitable alternatives to the Hushan Dam are sought. In a letter earlier this month to the Taiwanese authorities Dr Peter Schei, chairperson of BirdLife's Council, asked that they "respond positively to this appeal and consider alternatives to the current project in order to avoid the destruction of an area of habitat so critical to a species with such a threatened and fragile future."

For further information on the Hushan Dam and advice on what you can do to help: visit www.antihushandam.blogspot.com/