Asia's rarest seabird has been discovered breeding on the Korean peninsula, BirdLife International has revealed.

While conducting a routine survey in spring 2016, a team of scientists from the National Institute of Ecology of Korea found two breeding pairs of Chinese Crested Tern in a Black-tailed Gull colony on a rocky islet in the Yellow Sea, seven kilometres off the coast of south-western South Korea.

With fewer than 100 individuals known to exist, Chinese Crested Tern is one of the rarest birds in the world — possibly the rarest seabird in the world, and certainly in Asia. Only rediscovered 16 years ago on the east coast of mainland China after its assumed extinction since 1937, only three breeding sites were known, all on islands south of China. That is, until 2016: as well as this South Korean discovery, a new site was also confirmed in the Taiwanese Strait. It is hoped that these new strongholds could help the Critically Endangered species bounce back from near-extinction.

Yunkyoung Lee, one of the finders, explained: "Our hearts raced when we saw them.

"When we saw the distinctive head crests we couldn't believe we were looking at two pairs of nesting Chinese Crested Tern."

Realizing the importance of their discovery, the Korean researchers quickly sprung to action to protect the terns. The Ministry of Environment was quick to assist, restricting all civilian access (including researchers) to the island to ensure the terns had the best possible chance of breeding successfully. By proposing conservation regulations and information on breeding behaviour, BirdLife is now supporting the Ministry to turn this designated Special Island for Protection into a stable breeding ground for the species. 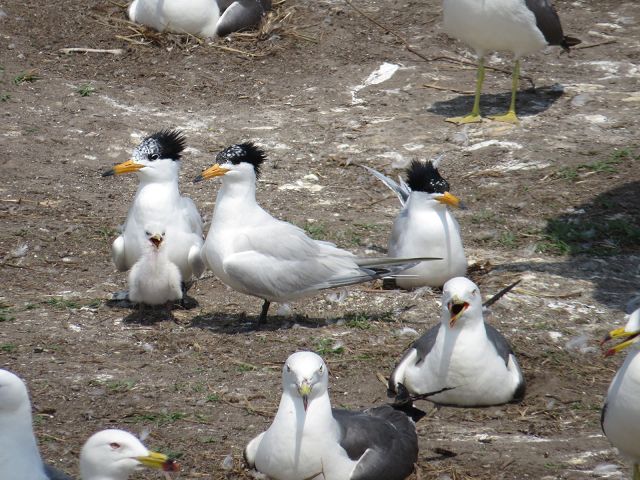 Chinese Crested Tern has previously been known only to breed among colonies of Swift Terns. Simba Chan, Senior Conservation officer for BirdLife International in Asia, explained: "There are no breeding colonies of Greater Crested Tern north of the Yangtze estuary, so we previously thought that Chinese Crested Tern would not breed in the Yellow Sea region before their numbers reached a threshold large enough to form their own colony. The new site [among Black-tailed Gulls] means the future of this species looks more promising now, as there are more colonies where it can nest."

There are, however, still many questions that need answering to safeguard the species' future. Given the size of its range, why is it so rare? Are egg collecting and human disturbance causing problems? In 2014 and 2015, thirty chicks fledged from the Jiushan Islands site, carefully watched over by a dedicated BirdLife team. However in 2016 the fragile colony unfortunately failed to produce chicks, highlighting that the species is far from safe, and new breeding sites need to be secured.