A total of nine Blue-throated Macaw chicks have successfully hatched from nestboxes put up by Asociación Armoniá, BirdLife International has reported.

This Critically Endangered species is endemic to Los Llanos de Moxos, a tropical savanna in northern Bolivia. Trapped almost to extinction, its remaining wild population is estimated to be in the low hundreds. It is now threatened with substantial habitat loss. Its entire known breeding range is situated on private cattle ranges. Blue-throated Macaws prefer trees with spacious cavities in which to nest, but 150 years of cattle-ranching has resulted in the clearing of most of the larger trees in the region. This has left the species low on choice when it comes to finding suitable trees for nesting. 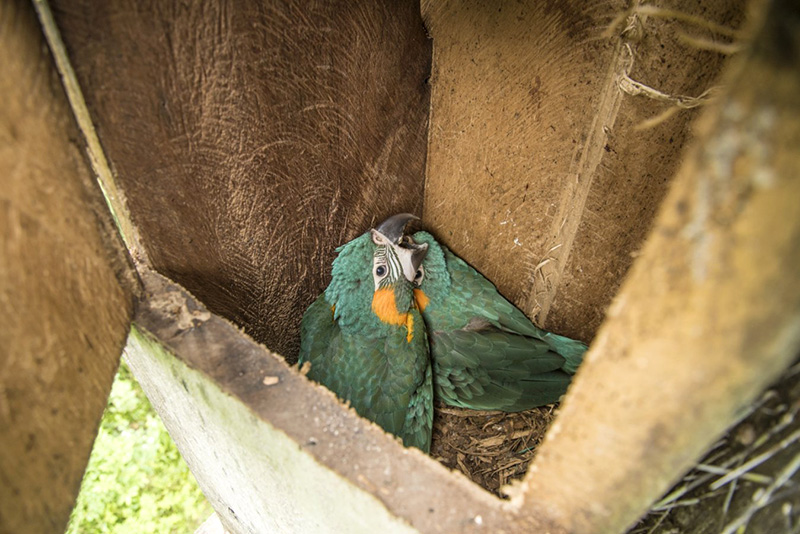 Blue-throated Macaw chicks in one of the specially erected artificial nestboxes. Photo by Aidan MacCormick (www.birdlife.org).

Armoniá – BirdLife’s part in Bolivia and a Species Champion for Blue-throated Macaw – has been working to improve the birds’ nesting options since 2006. The organisation has erected numerous artificial nestboxes across the southern part of the macaw’s breeding range. This year’s nine chicks bring the total to 71 successfully hatched youngsters in the 11 years the project has been running.

This year also marks a significant milestone for the programme: its first second-generation fledging. Both the chick’s parents hatched from nestboxes seven years ago and they have now returned to raise their own young.

Armoniá is now working to expand the programme, hoping to encourage the macaws to breed at a potentially successful site in the Barba Azul Nature Reserve, where 67 nestboxes have been erected.

Further good news comes from the World Land Trust. The charity’s Blue-throated Macaw Appeal has hit its £20,000 target. Armoniá will use the money to provide sustainable fencing for the cattle ranges on which the species’ breeding range is located.