An expedition to find the Critically Endangered Fiji Petrel Pseudobulweria macgillivrayi at sea has been successful, returning with stunning images and new information on one of the world's least-known seabirds. Known from just one specimen collected in 1855 on Gau Island, Fiji, the Fiji Petrel was lost for the next 130 years. Since 1984 there have been a handful of reports of "grounded" birds that had crashed onto village roofs on Gau. Until now there had been no confirmed sightings of the seabird at sea. 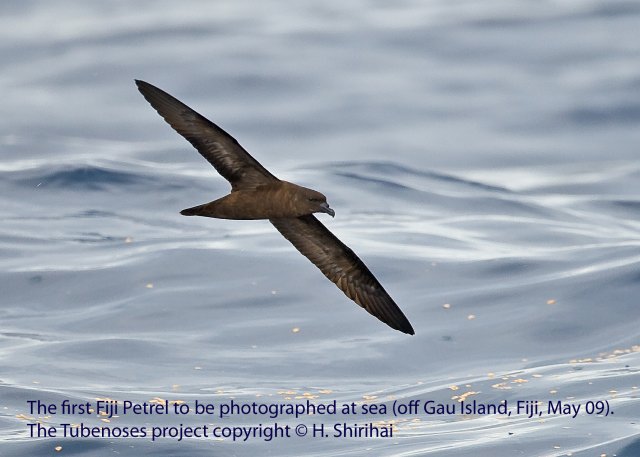 The first Fiji Petrel to be photographed at sea, off Gau Island, Fiji, May 2009. (Photo: H. Shirihai/The Tubenoses Project)

The search for the elusive petrel is described in a paper in the latest Bulletin of the British Ornithologists' Club published today. Up to eight individuals were seen over eleven days in an area around 25 nautical miles south of Gau. The species' flight, behaviour and detailed comparison to other species are also described for the first time. The paper's lead author, Hadoram Shirihai, said: "Finding this bird and capturing such images was a fantastic and exhilarating experience." Fellow expedition member Tony Pym commented, "To see such a little-known bird at such close range was magical."

Finding Fiji Petrel at sea was no accident, combining meticulous planning and luring the seabirds with a specially made food, called "chum". The main ingredients of chum? Fish offal cut into small pieces and mixed with very dense fish oil, to which water was added and then frozen in 10-kg blocks. Frozen chum blocks persist for up to one and a half hours, creating a pungent and constant oil slick that attracts petrels from some miles away. On the second day, the first Fiji Petrel appeared, approaching the chum slick from downwind, slowly zigzagging over the slick, and suddenly changing direction to drop onto a small floating morsel.

Fiji Petrel is classified as Critically Endangered, with its perilous status confirmed by this expedition: "We observed only a few Fiji Petrels," said Shirihai. "This was despite choosing what we considered to be the optimum month, and a method that would attract all petrels in the vicinity'' and Pym added, "The present evidence is that very few Fiji Petrels survive, that immediate efforts to find the nest sites are needed, and prompt, effective protection is urgently required before it is too late." 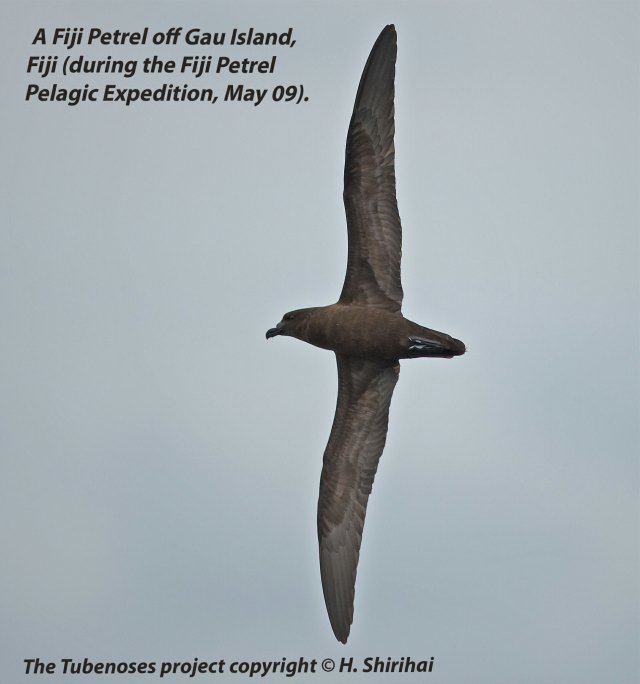 "More surveys to locate the breeding area of Fiji Petrel are planned for 2010", said Dick Watling of NatureFiji-MareqetiViti. "Once we know the location, we can assess what needs to be done to turn around the fortunes of this species."

"Fiji Petrel is one of 192 bird species which are Critically Endangered," said Jez Bird, Global Species Officer at BirdLife International. "Because Fiji Petrel is exceptionally rare and extremely poorly known any new data concerning range and abundance are vital to its conservation."

The expedition also gathered valuable distributional information on many other seabird species, including the Endangered Phoenix Petrel Pterodroma alba and the Vulnerable Gould's Pterodroma leucoptera and Parkinson's Petrels Procellaria parkinsoni.