As regular readers of the RSPB Saving Species blog will know, the RSPB has been supporting work on the Critically Endangered Sociable Lapwing since 2005, and from 2011 has been acting as co-ordinator for the implementation of the International Single Species Action Plan for the species under a Memorandum of Cooperation with the United Nations Environment Programme (UNEP) Secretariat of the Agreement on the Conservation of African-Eurasian Migratory Waterbirds (AEWA). We know from extensive research between 2004 and 2012 that Sociable Lapwings are declining due to low adult survival, which is almost certainly caused by being shot during migration. There is evidence from known stopover sites in northeastern Syria and some areas in Iraq from 2008 and 2009 that these birds are widely hunted by both locals and visiting falconers from the Gulf States.

The latest reports from the region are the first to confirm the killing of Sociable Lapwings in Kuwait. The birds appear to have been shot on 12th March. Tim Stowe, the RSPB's Director of International Operations, says: "Regrettably, this is the first confirmed hunting of Sociable Lapwings in Kuwait, and this latest information is of particular concern as these birds were returning to Kazakhstan where they would have started to breed in six weeks' time." 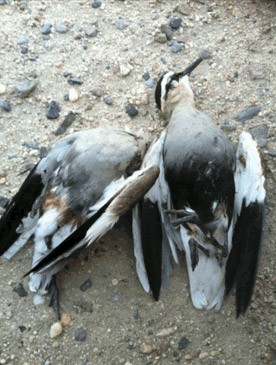 In May 2012, the revision of the 2002 Action Plan was adopted by the 5th Meeting of the Parties to AEWA (MOP5) in La Rochelle, France (see more details on the Amazing Journey website). This identified the urgent need for action to implement and enforce effective hunting legislation across states within the Sociable Lapwing's range. Sergey Dereliev, AEWA Technical Officer, said: "Although Kuwait is not yet a Contracting Party to AEWA, the Government has expressed its interest in the objectives of the Agreement through attendance at MOP5, and it could play a significant role in the Gulf region in helping to halt the decline of this Critically Endangered species by implementing and enforcing hunting legislation. By improving adult survival by 30% we could see a stabilization of the current population size on the way to a future increasing population trend."

RSPB and Swarovski Optik have been working through the BirdLife International Preventing Extinctions Programme to save the Sociable Lapwing. You can follow our work on the Amazing Journey website. This year we are planning to attach more satellite tags to the birds on their breeding grounds in Kazakhstan and track them to the Middle East. This will further our understanding of the migration route and enable us to target future awareness-raising and advocacy at the right stopover sites and range states. You can support our work by making a donation via the Amazing Journeys 'get involved' pages.