Cranes and boats and planes

Plans to bring back the eggs of wild Common Cranes for a project to re-introduce the birds to Somerset as part of a UK reintroduction programme have been hit by the air-travel ban. The eggs are being collected in Germany as part of the Great Crane Project run jointly by RSPB, Wildfowl & Wetlands Trust and Pensthorpe Conservation Trust, with major funding from Viridor Credits Environmental Company. 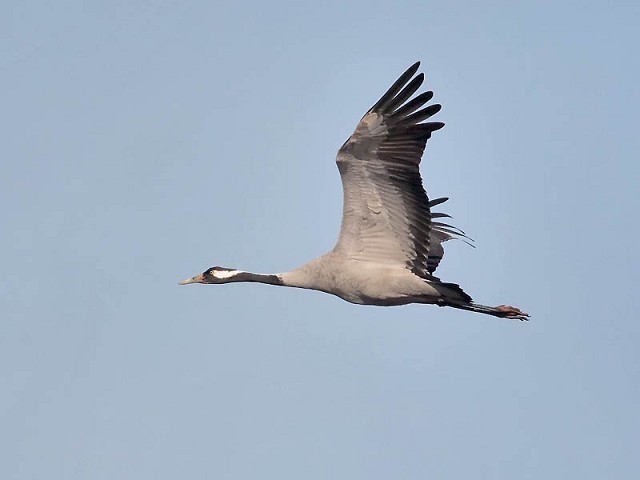 The original plan was to work with German conservationists to collect the eggs then bring them back courtesy of Airbus and Lufthansa to the WWT headquarters at Slimbridge in Gloucestershire. Here they are to be hatched and raised in Crane School before being released on the Somerset Levels and Moors. Members of the Great Crane Project team set off, as planned, on Saturday with a truck and all the specialist equipment required. The plan then was for WWT's top aviculturalist, Nigel Jarrett, to hop on a plane first thing this morning and meet the rest of the team in Germany later today. But after a weekend of watching and waiting for news that the air-travel ban was lifting, undaunted Nigel instead arranged a hire car and set off on the 14-hour drive alone before dawn broke this morning, anxious to be in Germany in time to collect the eggs on schedule.

Nigel and the team are booked onto a Lufthansa flight on Friday to bring their special cargo of eggs back to Slimbridge, but with the continued uncertainty over air travel, it is quite likely the team will return by road and sea instead. However, it is hoped that the planned second and third egg-collection trips between Slimbridge and Germany later this month will continue as planned courtesy of Airbus and Lufthansa.

Great Crane Project Manager Damon Bridge said: "This is quite a complex operation, so we've had to do some quick thinking to work out a way of getting the eggs back on time and ready for hatching early next week. So, instead of flying them back, it looks as though they will now set off on a rather epic road journey across Europe, then by boat to the UK and eventually Slimbridge. Fortunately, our aviculturalists from WWT have had plenty of experience of doing this sort of thing before so, although air travel was our preferred option, the birds will be just fine on their road trip, safely held in incubators for the journey through Germany and France."

If required, the Great Crane Project team will do the journey back to the UK non-stop, taking turns driving, so that the birds get back to Gloucestershire in time to hatch in the newly built Crane-rearing area. It is expected the first will hatch towards the end of the month. From there they will be raised by specially employed aviculturalists before a final journey down to Somerset.

Damon Bridge added: "I can't wait to see the first youngsters hatch: it's taken us many years to get to this stage and it'll be such a great moment."

The Great Crane Project is a partnership between the Wildfowl & Wetlands Trust, RSPB and Pensthorpe Conservation Trust, with major funding from Viridor Credits Environmental Company. The aim is to restore healthy populations of wild Common Cranes throughout the UK, so that people can once again experience these beautiful birds.