Corncrake rescued by kayaker in Northumberland

A Corncrake found stranded in the North Sea was rescued by a kayaker before being returned to land.

The bird, a juvenile, was found in Cullercoats Bay, Northumberland, by photographer Cal Thompson, who was out shooting a video for CBK Adventures. He spotted the bird struggling in the waters some 400 m offshore. Cal realised that it was very much not where it should have been so picked it up and gave it a ride back to the shore, where it was able to dry off and continue on its way. 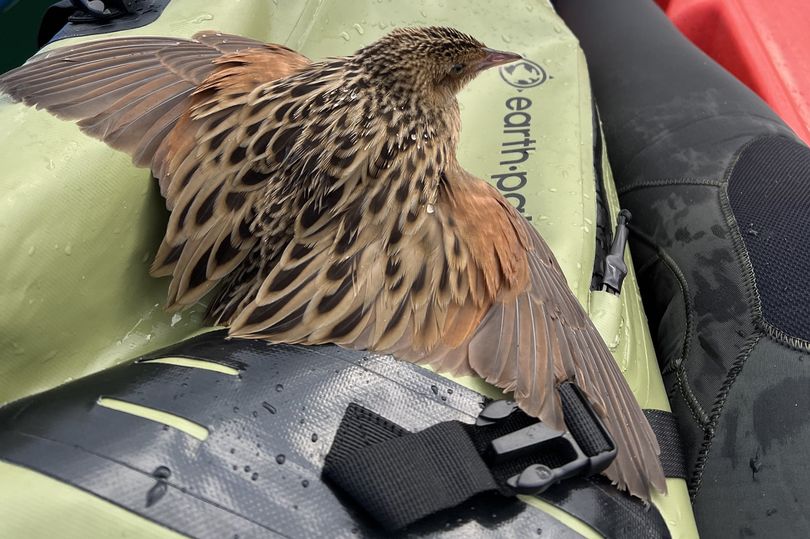 The Corncrake having been rescued (Cal Thompson).

He said: "I knew it was out of place but didn't realise how out of place it was. I grew up on a farm and my dad's always been keen on his birds. When I saw it in the water I thought it could have been a seabird and had avian flu, but when I saw it wasn't, I thought I'd just scoop it up and see what it was.

"It seemed pretty much okay, it was just a bit waterlogged and it gladly accepted a ride back to the shore, where I googled pictures of Corncrakes and saw it was a pretty good match. It sat on the rocks in the sun drying off for a while before it went on its way."

"I sent the picture to a friend of mine who works on an RSPB reserve up in Islay on the west coast of Scotland. He's been preparing Corncrake habitats all winter and none of them showed up!"