Conservationists gunned down in Cambodia

Two conservation workers attempting to stop illegal logging and poaching have been murdered in Cambodia as they slept.

Sab Yoh, a policeman, and Sieng Darong, a forestry administration ranger for the Wildlife Conservation Society (WCS), were shot on 7 November with high powered weapons as they slept during an overnight patrol tracking illegal loggers and poachers in the Preah Vihear Protected Forest, near Robonh village in the Choam Khsant district of north-western Cambodia. They were part of a team of four, one of whom escaped the gunfire, while another was wounded but is now in an uncritical condition. 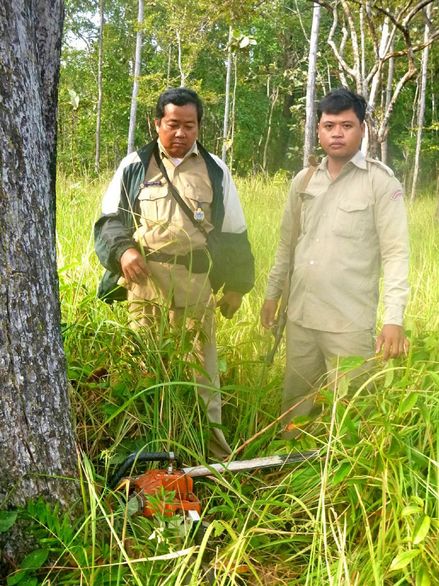 Sab Yoh (left), a policeman, and Sieng Darong, a ranger, were tireless in their work for Cambodian conservation before they were murdered in a cowardly attack by as yet unknown assailants (Photo: WCS Cambodia).

In an official WCS statement, Ross Sinclair, Director of WCS Cambodia, said: "We extend our heartfelt condolences to the families of our two Royal Government of Cambodia partners, killed on November 7 in the Preah Vihear Protected Forest while they were bravely patrolling to stop illegal logging and poaching.

"Darong, 47, and Yoh, 29, had confiscated chainsaws from an illegal logging site a few hours earlier with the rest of their team. After the raid, all four remained in the area to continue their investigation even as they were fully aware that heavily armed criminals were still in the area.

"Darong and Yoh had patrolled Cambodia’s forests for many years, understood the dangers of their work, and were focused and determined to protect these forests and wildlife from criminals. WCS has worked in this area since 2000, and we will remember Darong and Yoh as brave forest rangers who didn’t hesitate in times of danger. Darong, survived by a wife and two daughters, has worked as a WCS counterpart since 2014 and was patrol team leader. Yoh, survived by his wife and infant daughter, had worked as a WCS counterpart and patrol member since 2009.

"We are deeply saddened by the loss of our colleagues. In their honour and to honour all those who day-in and day-out work to protect the forests and wildlife of Cambodia, we will continue to support our government and community partners in their efforts to stop the illegal logging and poaching, and to bring the murderers to justice.

"Every day forestry rangers and law enforcement officers risk their lives to protect wildlife and the forests. We should not allow criminals to destroy the forests of Cambodia and to threaten and murder those working tirelessly to protect this country’s natural heritage. Darong and Yoh will always be remembered as conservation heroes."

The two conservationists' work is essential in Cambodia, as the country has lost primary rainforest at an alarming rate — tree canopy covered 70 per cent of the country in 1970 but was down to just 3.1 per cent in 2007, with an overall loss of almost 75 per cent since the end of the 1990s. The sustainability of Cambodia's forests is in critical danger. The illegal logging industry almost entirely exists to supply the demand for wood from China, according to environmental rights group Global Witness.