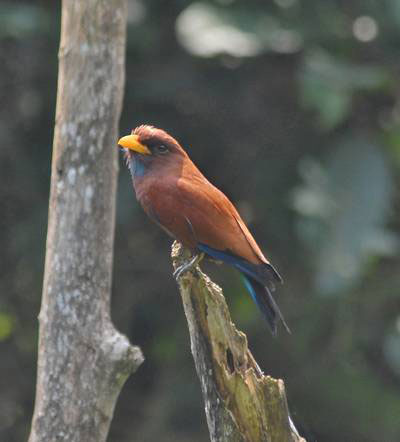 The fate of Mabira Forest Reserve - home to 30% of bird species found in Uganda - continues to hang in the balance as President Museveni and some elements of the Ugandan government attempt to hand over a quarter of its area for sugarcane cultivation. BirdLife International and NatureUganda (BirdLife in Uganda) continue to argue that the economic benefits of retaining Mabira in its present form, will easily exceed the 'short-sighted' gains quoted by the government in the proposed forest 'give-away'.

Mabira Forest Reserve (at over 30,000 hectares) is listed by BirdLife as an Important Bird Area (IBA) and contains over 300 bird species, including the Endangered Nahan's Francolin Francolinus nahani. The forest is also home to nine species found exclusively in the region including Grey-cheeked Mangabey Lophocebus albigena johnstoni, a recently identified endemic primate subspecies. In order to convey the enormous value of retaining Mabira Forest Reserve, NatureUganda has undertaken an economic study of the site, which they are now putting to the Ugandan government. Among the economic benefits of retaining Mabira that NatureUganda have outlined are:

"The economic studies that we have undertaken clearly indicate that keeping Mabira Forest Reserve for reasons of conservation, constitutes a better land-use option than sugarcane growing when total economic value is considered," said Achilles Byaruhanga, Executive Director of NatureUganda. "If a quarter of Mabira is chopped down the effect on the remaining forest will be far-reaching, reducing the range of species, causing encroachment, erosion and siltation, and reducing its capacity to provide services, so there would be less water in rivers, less rain, less carbon intake, fewer tourists," he added.

NatureUganda's arguments for stopping the 'give-away' of Mabira Forest Reserve are supported by BirdLife International, a global alliance of over one hundred conservation organisations. "For the Ugandan government and Mehta Group Sugar company to continue with a venture that is so very costly in terms of biodiversity loss and in terms of economic stability, is wholly deplorable." said Hazell Shokellu Thompson, Head of BirdLife's Africa Division. "However, we are confident that once all the facts have been reviewed, the Ugandan government will do the right thing for the Ugandan people and stop the 'give-away'. Uganda ratified the Convention on Biological Diversity (CBD) in 1993 and has a fairly good track record in upholding the treaty so far. The government has an obligation to continue to adhere to the agreement in the same way that many African and world nations do," he commented. "The sugar company itself also argues that it has a strict policy of environmental compliance which this venture quite obviously contradicts."

Mabira is only one of a number of 'give-aways' proposed by the Ugandan government, believed to be planning a bill to amend the National Forest and Tree Planting Act that would give the National Forestry Authority power to de-gazette protected forests without first going through parliament.