RSPB Scotland has today [24th September 2012] issued an appeal and a reward for information*, following the discovery of the body of a Golden Eagle on Deeside. The bird, fitted with a satellite transmitter, was found on 5th May 2012, after signals sent by the transmitter indicated that the bird had not moved for several days. The body was found lying face down, with its wings folded, under a tree branch close to a lay-by on a quiet country road near Aboyne, and was seized as evidence by officers from Grampian police. The carcass was then taken for a post mortem at the Scottish Agricultural College laboratory in Aberdeen. This concluded that the bird had suffered two broken legs due to trauma "that could be consistent with an injury caused by a spring-type trap" and that the severity of these injuries "would prevent the bird from being able to take off." 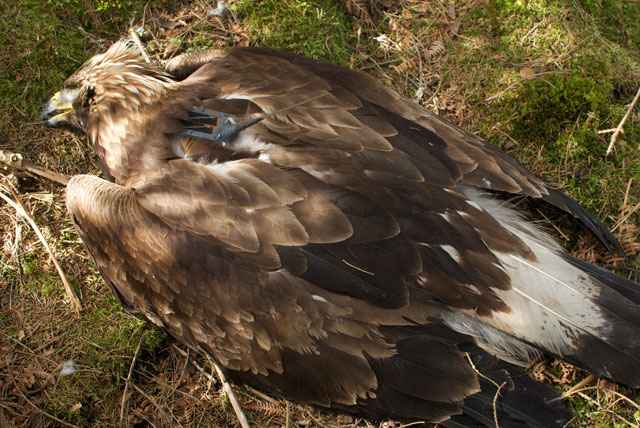 The bird had been fitted with a transmitter by RSPB Scotland staff, in full partnership with a local landowner, a few days before it had fledged from a nest in the Monadhliath Mountains, southeast of Inverness, in July 2011. By re-examining the satellite data, RSPB staff discovered that the young bird spent its first few months in its natal area before venturing further afield. By April 2012 it was frequenting an area of upper Deeside, before moving southwest into Glenshee. On 28th April the bird moved eastwards into Angus. At 6am the following day the bird was located on a hillside overlooking Glen Esk. Over the next 15 hours a succession of satellite tag readings accurate to within less than 20 metres showed that the bird did not move from this precise spot until at least 9pm that evening, after nightfall. However, by 4am the next morning, 30th April, according to transmission data, it appeared to have travelled during the hours of darkness, some 15km north, to the location where its body was subsequently discovered some five days later. Satellite readings revealed that while the bird did not move from this position, it was probably alive until 4th May.

Follow-up enquires by both Tayside and Grampian Police found no further evidence as to how the eagle came to suffer its injuries, nor could it be established how the eagle came to move from Glen Esk to a position under a tree branch on Deeside overnight. However, a number of eagle down feathers were found between the lay-by and the bird's final resting place.

Ian Thomson, RSPB Scotland's Head of Investigations, commented: "It is disgraceful that this magnificent bird was subjected to such suffering. The post-mortem evidence suggests that this bird was caught in an illegally set trap, smashing both legs. The data obtained from the satellite transmitter indicated that the eagle did not move from one spot on a hill high above Glen Esk for over 15 hours. Then, during the night, when eagles do not readily fly, it has inexplicably moved to a new position, hidden under a tree and close to a road. Here, over the next four days, this eagle suffered a lingering death."

Stuart Housden, RSPB Scotland Director, added: "Anyone who cares about our wildlife will be disgusted by what appears to be an appalling crime and the lengths taken to hide the facts from discovery. Whilst efforts to stamp out the illegal poisoning of birds of prey are perhaps beginning to yield results, this dreadful case shows that the persecution of our raptors continues through the use of traps and other means."

"We call upon anyone who can provide further information about this case to contact the wildlife crime officer at either Tayside or Grampian Police without delay. Cases like this really do have a negative impact on Scotland's reputation as a country that respects and values all its wildlife heritage. I am today offering a £1000 reward for information that will assist a successful prosecution."

Satellite transmitters fitted to birds of prey are increasingly being used by conservationists and scientists to monitor the movements of the birds, allowing the dispersal of young birds to be studied, identification of important areas regularly utilised by the birds and also in indicating the location of dead birds. A satellite-tagged golden eagle, named “Alma” by researchers, was found to have been illegally poisoned in Glen Esk in 2009, whilst other poisoned eagles fitted with transmitters were found in Grampian in 2011, and in Lochaber earlier this year.

RSPB Scotland is offering a reward of £1000 for information that will assist a successful prosecution.