There are fears that Capercaillie populations in the southernmost part of their range are no longer viable despite intensive efforts to save them. A cluster of small populations in the Trossachs and Argyll have steadily declined over recent decades. The last of these populations, centred on some of the Loch Lomond islands, has now dwindled to the point where there are only a few birds left. The nearest strong population is now in the Cairngorms National Park — well beyond the distance that Capercaillie will travel to search for territory or a mate. This leaves any remaining birds on the islands isolated, with no realistic prospect of being joined by individuals from elsewhere. While some birds may still be spotted on the islands, they are very few in number and little or no breeding is taking place. Long-running efforts by Loch Lomond & The Trossachs National Park Authority, Scottish Natural Heritage (SNH), RSPB Scotland and local landowners have not been able to halt this decline. 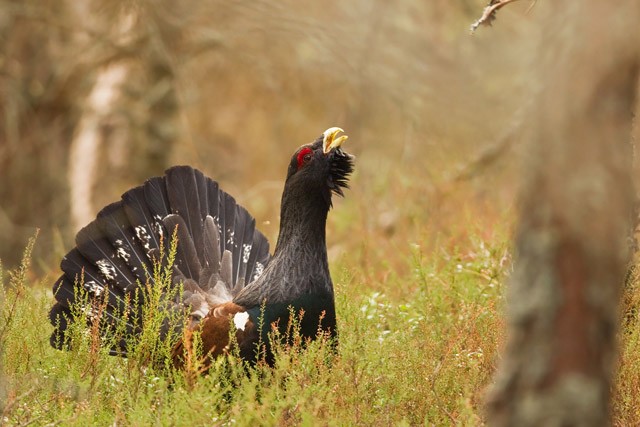 The strongest Capercaillie populations are in the Cairngorms National Park. The last national survey in 2009–2010 estimated that 80% of the UK population was in the Park, the vast majority in Strathspey. Numbers there currently appear stable. Capercaillie populations in Scotland and across Europe are under pressure from a range of factors. Recently these have included a run of wet summers, which have seriously affected chick survival. However other factors include predation, loss or fragmentation of habitat, collisions with deer fences, and human disturbance. The decline in the southern Scottish populations is likely to have been due to a combination of these factors.

The organisations working to protect Capercaillie in Scotland are advocating a pragmatic approach to targeting resources where they will be most effective in maintaining viable populations. Alan McDonnell of SNH said: "The Capercaillie is a highly valued part of Scotland's nature, culture and history and we are committed to ensuring its long-term survival. A lot of people and organisations have worked for many years to help the population of Capercaillie on the Loch Lomond islands, but we need to face the facts about this increasingly isolated group of birds. As things stand, we need a pragmatic approach to Capercaillie conservation and our resources are focused on preserving the core populations in the north of the country."

Alan Bell, natural heritage manager for Loch Lomond & The Trossachs National Park Authority, added: "Despite all our shared efforts the simple fact is that no new birds are moving into the area to breed with the resident birds. Although individual birds were spotted in 2012, we have seen no signs of breeding activity in the last two years. The islands are rich places for nature and the efforts to protect the important wildlife there will of course continue."

Anne McCall, RSPB Scotland regional director, said: "The loss of the iconic Capercaillie from the Loch Lomond islands is a real disappointment. Combined efforts to reverse declining population trends have not succeeded and this situation highlights the pressing need to take fast, targeted action wherever possible. As such it is increasingly important that resources are found to support work elsewhere for our remaining Capercaillie populations if they are not to suffer the same fate."

Dennis Robertson, the SNP MSP who is the species champion for Capercaillie in the Scottish Parliament, commented: "I am naturally disappointed at the stark prospect for the Capercaillie in this part of Scotland and I am sure many of my colleagues will share my frustration. However we have to face the facts that Capercaillie populations have shown an unfortunate, but steady, decline, here, and in some other places. What we must do now is redouble our efforts to nurture and protect this iconic bird in areas where it is doing better and I am committed to that task."