Common Crane fledges in Wales after a four-century absence

A Welsh-hatched Common Crane has taken to the skies for the first time in around 400 years.

A pair of these spectacular wetland birds nested on the Gwent Levels this year, successfully rearing a single chick which flew for the first time in August. The adult birds originate from the Great Crane Project reintroduction scheme which released 93 hand-reared cranes between 2010 and 2014 on the Somerset Levels and the Moors area at West Sedgemoor RSPB, Somerset.

Standing at a height of 1.2 m, this graceful grey species with its long, elegant neck and drooping, curved bustle is an increasing sight in Britain. 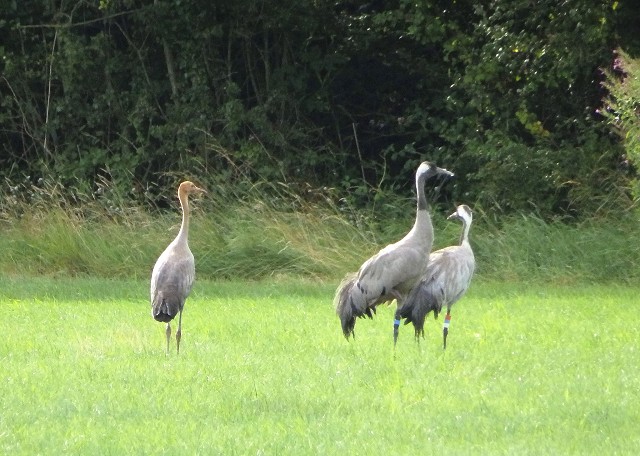 Damon Bridge, RSPB manager of the Great Crane Project, said: "These wonderful birds died out across the UK sometime in the 1600s, having been a favourite of the medieval dinner table. Seeing them spread back into their former haunts highlights the importance of protecting our wetlands."

Common Cranes need very quiet wet areas to breed, and an area of the Gwent Levels provided just the right mix of a secluded nest site and undisturbed, food-rich rearing habitat for one pair this summer, and it is hoped that they will return again to breed next year.

Richard Archer, RSPB conservation officer for the Somerset Levels and the Severn Estuary, said: "Although most of the released birds have now reached breeding age, this Welsh pair is one of only three that have successfully reared young this year, so they are really crucial to the project's long term success. Cranes could do well on parts of the Gwent Levels if the habitat can be restored to its former glory."

The parent birds are known as Lofty and Gibble, and the newly fledged chick has been given the name Garan, the Welsh word for crane. All three have now returned to Somerset where they are likely to spend the winter with the growing flock of around 60 birds. Nevertheless, having successfully raised a chick at the Gwent Levels, there's a very good chance that they'll return there to breed once again next year.

One pair successfully bred in Somerset and another in Wiltshire this year. The UK's wild crane population now stands at about 160 birds, roughly half from the reintroduction project and half from a natural re-colonisation that has been occurring in the east of the country since the late 1970s.

The Great Crane Project was funded by Viridor Credits Environmental Company and drew on the expertise of the RSPB, the Wildfowl and Wetlands Trust and the Pensthorpe Conservation Trust.

You can find out more about the project and where to see the cranes in the wild at: www.thegreatcraneproject.org.uk.