The Peregrine family that has nested high on Derby Cathedral for its third year hit the local headlines recently when three of the four youngsters came to grief when they tried to make their first flights. On Friday 13th June, one of the three males, colour ring number 005, was discovered outside a nearby pub called The Standing Order (it used to be a bank). 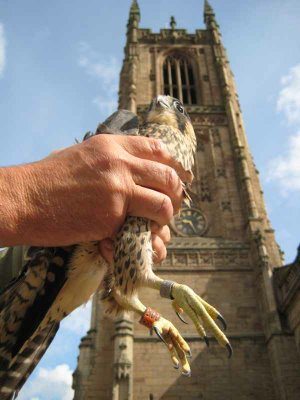 Male 005 en route back up the cathedral tower

Then, three days later, the only female eyass (003) flopped down through some trees onto a stone alley close to the cathedral. Fortunately, on both occasions, project staff from the Derbyshire Wildlife Trust, Derby Museum and the cathedral itself were on hand to catch them up, put them in a box and carry them up the 198 steps to the top of the mediaeval cathedral tower to release them for a second attempt.

Once 005 had been photographed for the project blog and the local paper, he was soon released on a suitable piece of stonework at the top of the tower, somewhat disoriented by his experience though otherwise none the worse for his adventure (even though he didn't get a drink at the pub beforehand!) 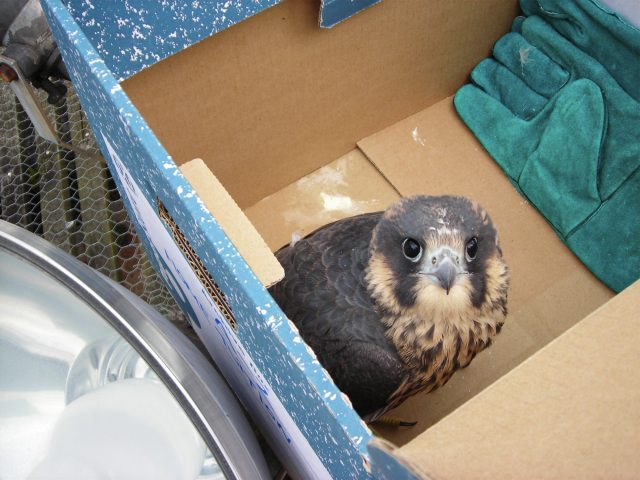 Male 005 just before his release at the tower top

Once oriented, 005 flopped down onto the top ledge and close to one of his siblings. Here he would find some cached food or be fed by a returning parent once things had calmed down. 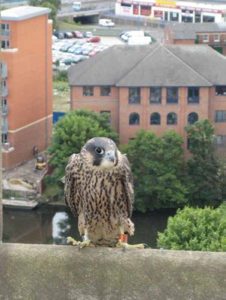 005 not quite ready for another go (photo: Nick Brown, DWT)

Then, three days later, the female eyass (003) landed on the roof of a building which is being refurbished. When a workman climbed up to start work, she was startled and flew unsteadily into some tall trees close to the cathedral. We ran round to discover her hanging upside down from a thin branch at the top of a tree. She soon let go, coming down through the leaves to find herself standing unceremoniously on a stone alleyway, faced by two bird photographers and me. We managed to coax her into a nearby garden where we could corner her safely away from any traffic. She hid behind a wheelie bin but proved easy to catch once surrounded. She too was put in a box and taken up the tower. In a strange way, we were glad to have a chance to inspect this bird's feet because a week ago, one of them looked very swollen. Happily both feet were fine and she could be released without the need for any treatment. 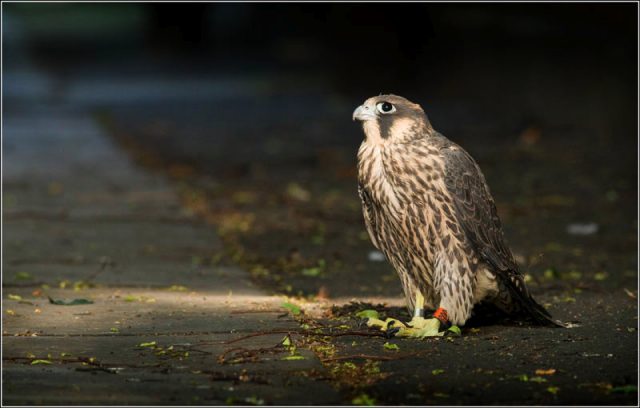 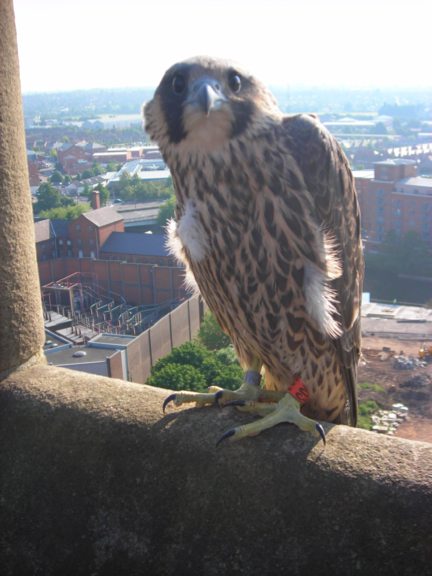 A bewildered 003 back at the top of the tower (photo: Nick Brown, DWT)

Meanwhile, the adult falcon circled the tower, calling anxiously but giving photographer Jon Salloway, who had come up to help us release the bird, a rare opportunity to take some quick shots as she circled the tower. 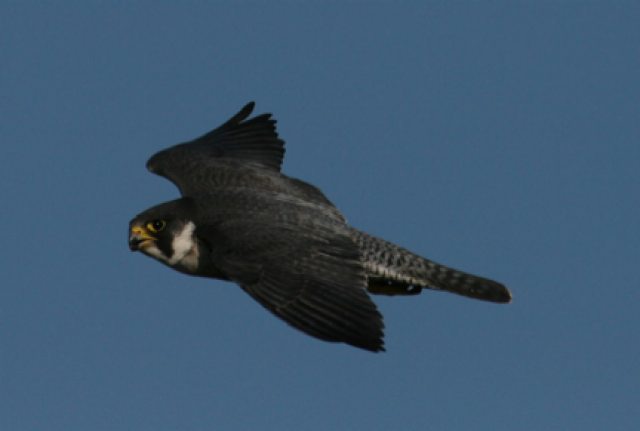 Then, last night (17th June) the youngest male (007, affectionately dubbed 'tiddler' by the webcammers) was discovered in a nearby road. He was corralled in the car park of another local pub (The Dolphin this time) and also taken back to the top of the tower.

This project, which is the subject of a recent DVD featuring Chris Packham (available from BirdGuides' estore), has been a great success ever since Nick Moyes, of Derby Museum, abseiled down to fix the platform in 2006 and again to attach two webcams in 2007. Earlier this year he added a third webcam. This so-called 'pudding cam' has given us additional views of the adults on the gargoyles above the nest, a feature no other UK Peregrine webcams have. We've seen mating, a Jay being brought in (possibly not completely dead!) and now some of the recently fledged youngsters.

So far this season, there have been over 300,000 hits to the webcams and blog. The blog gives the latest news, a chance to comment and also YouTube video clips of the best bits of action - nest scraping, egg laying and hatching, feeding the chicks as well as mating sequences and the Jay referred to above. How Derek Ratcliffe would have enjoyed these intimate insights into the lives of Peregrines, his favourite bird! These clips remain accessible at http://derbyperegrines.blogspot.com/ and could make a significant contribution to any study of Peregrine behaviour. The project has attracted many obsessive viewers all over the world, including individuals in Hong Kong, Canada and the USA and others in South Africa, Bulgaria, India, Hawaii and even one in mid-Pacific (someone on Midway Island maybe - or even a Loggerhead Turtle?). 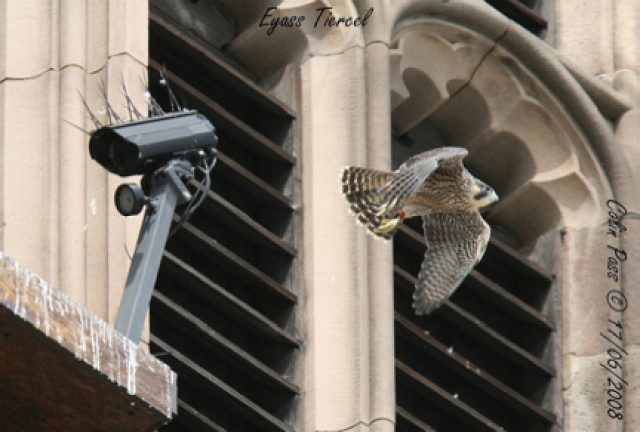 One of the youngsters leaves the nest platform, out of range of the webcamera (photo: Colin Pass)

Meanwhile, on the ground, Derbyshire Wildlife Trust operates a daily watchpoint where visitors can see the birds through telescopes. This will continue for a couple of weeks at least. The watchpoint attracts passers-by and visiting birdwatchers alike. An increasing number of schools have been accessing the webcams and blog this summer to take advantage of what is a great educational resource. The project team hope to capitalise on this interest next season.

The prey the adults take has also been the subject of study at Derby since 2005, with over 40 species now recorded. The latest addition to the list was a Little Owl, though perhaps the most interesting was a Swedish-ringed Arctic Tern (see previous BirdGuides article). Other species have included Quail, Waxwing, Bar-tailed Godwit, Water Rail and Jack Snipe.

This project is a successful partnership between Derby Museums, Derbyshire Wildlife Trust and the cathedral itself.