Chicks tagged in run up to Hen Harrier Weekend 2016

Two young Hen Harrier chicks have been satellite tagged at an MoD base in Argyll as part of a national RSPB project to protect and conserve the threatened birds of prey.

The pair came from a nest of four young located at HM Naval Base Clyde's high security Coulport site, which is the storage and loading facility for the UK's Trident nuclear warheads. All four chicks were ringed and two, a male and a female, were tagged.

The satellite tagging was conducted as part of the RSPB's part EU-funded Hen Harrier LIFE+ Project, an exciting five-year programme of nest protection, monitoring, community engagement and investigations work to secure a future for these birds in Scotland and northern England. The data gathered from the tags will be monitored, to see where the birds go and identify the areas where they are most at risk. 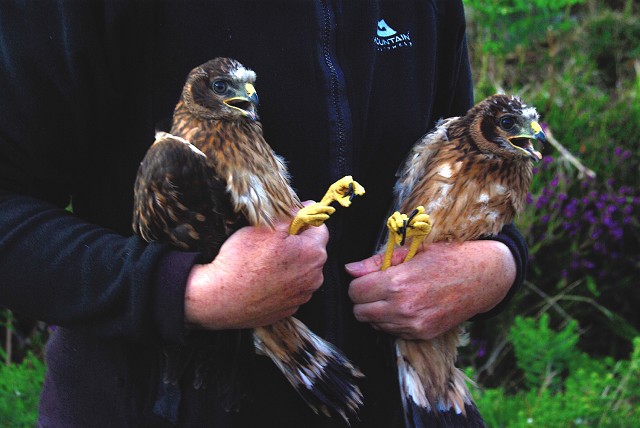 Thanks to the EU-funded Hen Harrier LIFE+ Project, this pair of young Hen Harriers was tagged on the Isle of Man in 2015 (Photo: RSPB)

Hen Harriers are a red-listed species of highest conservation concern in the UK. They were hunted to extinction over most of the UK during the Victorian era and although their populations have recovered since then, they remain very much at risk from disturbance and illegal killing.

Blánaid Denman, manager of the RSPB's Hen Harrier LIFE+ Project, said: "The last national survey in 2010 found Scottish Hen Harrier populations had fallen by 20 per cent in just six years, with only 505 pairs remaining. According to an independent government report, Scotland should be able to support up to 1,790 pairs of harriers, but they are still being blighted by illegal killing and disturbance. As a result, these iconic birds are now missing from huge swathes of our landscape, when they should be an integral part of Scotland's natural beauty. That's why this type of work is so important, and why it's so positive to see a large landowner like the MoD leading by example and championing these birds.

"We're delighted to have worked alongside the MoD who have been monitoring and protecting this nest at Coulport. Given the parlous state of Hen Harriers in Scotland it's fantastic to see an adult pair being able to safely raise four fit and healthy young chicks. Hen Harriers travel widely outside the breeding season, so we're waiting in anticipation for these chicks to spread their wings now, before being able to follow their lives and track their journeys around Britain and possibly beyond."

This Sunday, 7 August, will mark the third annual Hen Harrier Day, now dubbed 'Hen Harrier Weekend'. Events will take place across England, Scotland and Northern Ireland over the weekend to raise awareness of the plight of Hen Harriers. 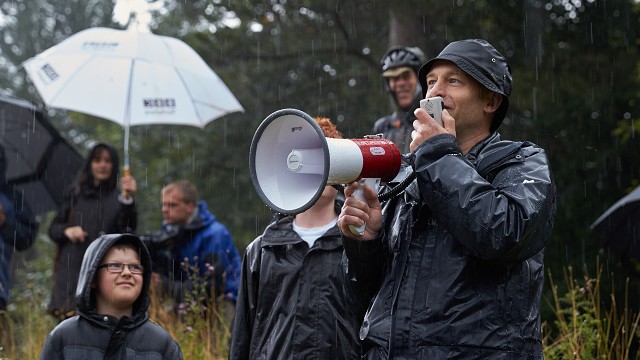 On Sunday, Hen Harrier Day in the Peaks kicks off at 11 am at Edale. Speakers here will include Dr Mark Avery, Green Party leader Natalie Bennett, young conservationist Findlay Wilde and Jon Stewart, National Trust General Manager in the Peak District. Hen Harrier Day South also begins at 11 am at Dorset's Arne RSPB, and there are several other events taking place nationwide.

For more information on this year's programme vist: henharrierday.org/2016-events