The RSPB has challenged grouse moor managers to adopt techniques that could help resolve the conflict between grouse shooting and Hen Harrier conservation. In an article for the Journal of Applied Ecology, the Society lays out a vision for tackling the long-running conflict, in which Hen Harriers have paid the ultimate price. 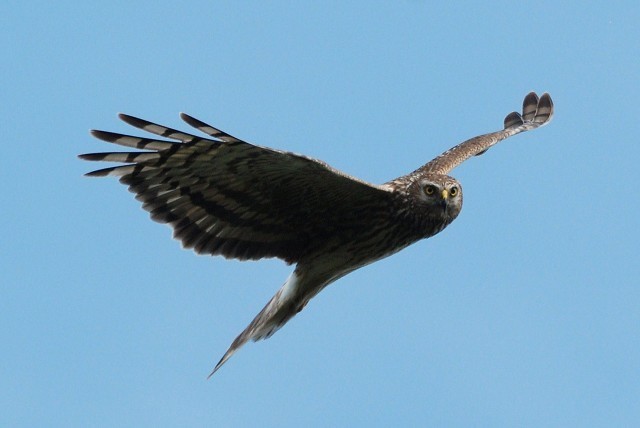 Hen Harrier numbers have been kept low because of illegal killing and disturbance over decades, with problems particularly associated with areas where moors are managed for intensive, driven-grouse shooting. Hen Harriers eat Red Grouse chicks, voles and Meadow Pipits, and the RSPB recognises that on some sites high densities of Hen Harriers can lead to driven-grouse shooting becoming economically unviable, as happened at one Scottish site, Langholm Moor.

In response to suggestions that the law should be changed to allow birds of prey to be culled on grouse moors, the RSPB questions whether a sporting activity that relies on protected birds of prey being disturbed and killed is a sustainable land-use. Instead, the Society is calling for management techniques that reduce the impact of Hen Harriers on grouse numbers to be trialled and encouraged by game managers. The article says grouse moor managers are not trying techniques that could help solve the problem.

Diversionary feeding has been shown to reduce the number of grouse taken by Hen Harriers by 86%, yet has not been adopted by grouse moor managers, other than at Langholm Estate in Scotland. Here, the Langholm Moor Demonstration Project is seeking to re-establish driven-grouse shooting alongside a thriving population of Hen Harriers and is showing encouraging signs of progress.

Other more novel techniques should also be explored. One of these simply involves allowing Golden Eagles to settle and breed in the vicinity of grouse moors, where their presence may deter Hen Harriers from settling. Sadly, the killing of Golden Eagles persists, making their return to grouse moor areas in England and Scotland unlikely as things stand.

The article cautiously welcomes a proposal by Professor Steve Redpath (Aberdeen University) to trial a brood management scheme. This would require grouse moor managers to allow Hen Harriers to breed freely on their moors. Where numbers of successful harriers nests exceeded an agreed threshold, additional broods would be reared in captivity nearby and released at the end of the season to rejoin the population, thus avoiding high levels of predation on grouse during the key period for shooting.

Lead author Dr Pat Thompson, RSPB's Uplands Conservation Officer, said: "Moorland managers and conservationists must work together to resolve this long-running conflict. Hen Harriers are on the verge of extinction as a breeding species in England, and to lose such a magnificent bird because of continuing intolerance towards it would be a sad indictment of society's ability to protect wildlife. We understand that many people involved in shooting are as appalled by wildlife crime as we are. The next step is for grouse moor managers to adopt techniques such as diversionary feeding more widely, and demonstrate that driven-grouse moor management is compatible with bird of prey conservation. If this turns out to be impossible, then it may be time to consider other approaches to managing our uplands."