A pair of Great Tits has been recorded in Aberfoyle, Perthshire, raising both their own chicks and two Blue Tit chicks at the same time.

Cameras in nest boxes often reveal a fascinating glimpse into the private world of wild birds, but one such camera at The Lodge Forest Visitor Centre, uncovered a truly remarkable family situation this summer.

The nest was first discovered in early June, and two of the eggs in the clutch were quickly identified as belonging to a different species. The eggs all hatched together, but despite being dwarfed by the much larger Great Tits, the two Blue Tit chicks fought their way to the front at feeding time and managed to survive, fledging at the same time as their adopted siblings. 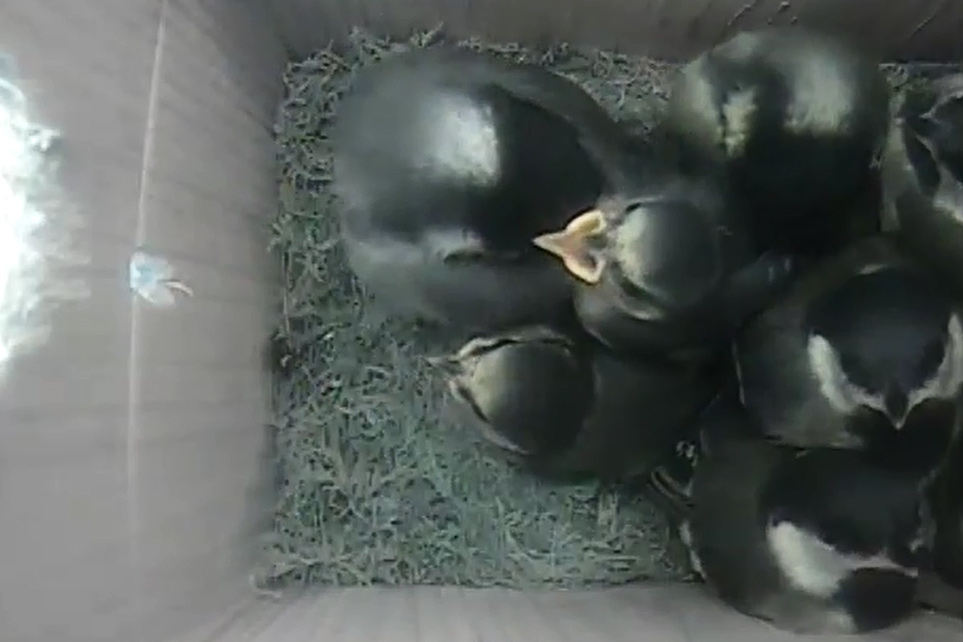 The smaller Blue Tit chicks can clearly be seen among the larger Great Tits (RSPB Scotland).

This behaviour is not unknown among Great and Blue Tits, but it is rare to catch it on film. Territorial arguments for good nesting sites are thought to lead to the larger Great Tits displacing their smaller rivals, sometimes after they've already laid their eggs. Blue Tits have also been recorded sneaking back in after such a takeover and adding a few eggs of their own, perhaps as a last-ditch breeding strategy.

Ami Kirkbright, RSPB Scotland Wildlife Information Officer, said: "Watching this Great Tit nest with a mixed brood of chicks has just been incredible. It's something that no one here has ever seen before, it was really fascinating to research what was happening and then follow their progress over the weeks.

"We get some really privileged views of wildlife on our cameras here at The Lodge, with birds like our Western Osprey and owls, as well as lots of other animals, including Pine Martens and Red Squirrels. But the tits have been the star of the summer, not only for me, but for many of the visitors coming into the centre."

Scientists studying the long-term repercussions of these shared nests have discovered that the fostered Blue Tits fledge believing that they are Great Tits and start their adult life using incorrect songs and calls, before eventually reverting back to 'proper' Blue Tits.

For birds which may only have one breeding attempt in their short lives, this may imply that the furtive egg laying strategy is an evolutionary tactic for Blue Tits: a last resort which allows them to pass on their genes even after they've lost their nest.

It's probably much less common for Great Tit chicks to be raised by Blue Tits, though this did occur in one of the BBC Springwatch nest boxes in 2016. When this happens, it is probably accidental rather than a breeding strategy, as Great Tit chicks seem to be stuck thinking they're Blue Tits for their entire lives and are never able to mate successfully.