Can't see the grouse for the trees 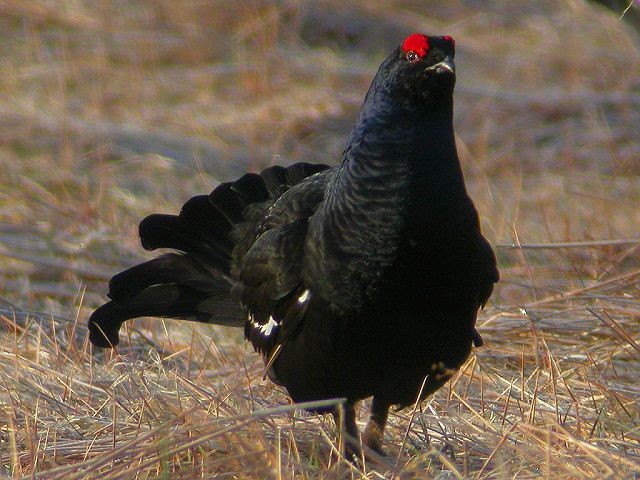 A direct link has been established for the first time between falling Black Grouse numbers and maturing commercial forestry plantations, according to the results of a major new study by RSPB Scotland and the Perthshire Black Grouse Study Group.

Conversely, Black Grouse can prosper while forests are young, and so the results of the long term study suggest a way forward for land managers to encourage Black Grouse.

Male Black Grouse (known as blackcock) gather in spring at communal display areas called leks to attract mates, making them relatively easy to count. The Perthshire Black Grouse Study Group counted the birds at these leks across a 700 sqkm area of Highland Perthshire from 1990, and numbers declined by almost 70% by 2002, raising fears of the species' local extinction. The authors of the study compared these counts with observations of habitat derived from a detailed satellite image of the area taken in 2000, relating the change in population to the changes in habitat over that period.

As in many parts of the British uplands, large commercial conifer forests were widely planted in the study area from the 1950s – 1980s, and the main habitat change during the study was the maturation of these plantations. While those trees were young, they were an ideal habitat for Black Grouse, as the associated growth of heather, blaeberry and other plants provided food, shelter and cover for chicks. However, once trees reach the stage where the canopy closes in such plantations (about 15-20 years in Perthshire), the ground flora is shaded out and the forests are generally avoided by Black Grouse.

The challenge for foresters is to produce forests that will hold Black Grouse permanently. Historically, birch and other native woodland and scrub fulfilled this role in Perthshire, but much of this habitat has been lost. There are signs of hope, however, and over the last decade, Forestry Commission Scotland in Perthshire has, where possible, sought to restore such habitats by encouraging the planting of native woodlands. This may be one reason for recent signs of revival in the fortunes of Black Grouse in Perthshire (note below). The Forestry Commission is now working with the RSPB, and SNH in Perthshire and elsewhere to develop forest management methods which will allow Black Grouse populations to be maintained in commercial conifer forests also.

Dr James Pearce Higgins, lead author of the study, said: "We’re not saying that extensive forest is necessarily a bad thing; but for Black Grouse to be successful demands a delicate balance to be maintained between several types of habitat. The ideal landscape for these birds contains a mix of heather moorland, rough grassland, wet flushes and open woodland or scrub. When forest plantations are young, they provide the open woodland and scrub component, but of course trees grow, and once the forest canopy closes the grouse are largely excluded from that area of the landscape. The challenge is to maintain the required mix of forest and moorland habitats within a commercially managed landscape, and these results should help us to do this."

Study findings may have wide relevance to efforts in other parts of the country to encourage Black Grouse numbers, where the impact of dense, non-native plantations is most keenly felt.

The most recent estimate of the British population of Black Grouse is 5078 lekking males in 2005, a 22% decline from the previous estimate only 10 years earlier. The species is on the RSPB red list of birds of conservation concern (the highest category for concern).

c.65% of the British population exists in Scotland, preferring uplands with a mixture of heath, woodland and shrubs. An estimated 800 lekking males were present in the study area in 1990, falling to 270 in 2002, a 66% decline in that period. This current population of 396 lekking males in the Perthshire study area indicates that the population is now showing signs of a partial recovery, and represents a sizeable fraction of the national total.

The role of forest maturation in causing the decline of Black Grouse Tetrao tetrix will be published in the scientific journal Ibis in January, and is available online now at http://www.blackwell-synergy.com/toc/ibi/0/0.