A Canada Goose which was found caught up in a fishing line in Staffordshire may have to have its wing amputated.

Etwall-based animal rescue centre Linjoy Wildlife Sanctuary and Rescue rushed to Branston Water Park after it was reported a goose had become tangled in fishing line and was struggling to free itself. Staff are hoping the bird makes a full recovery but say there is a risk its wing might not heal properly. 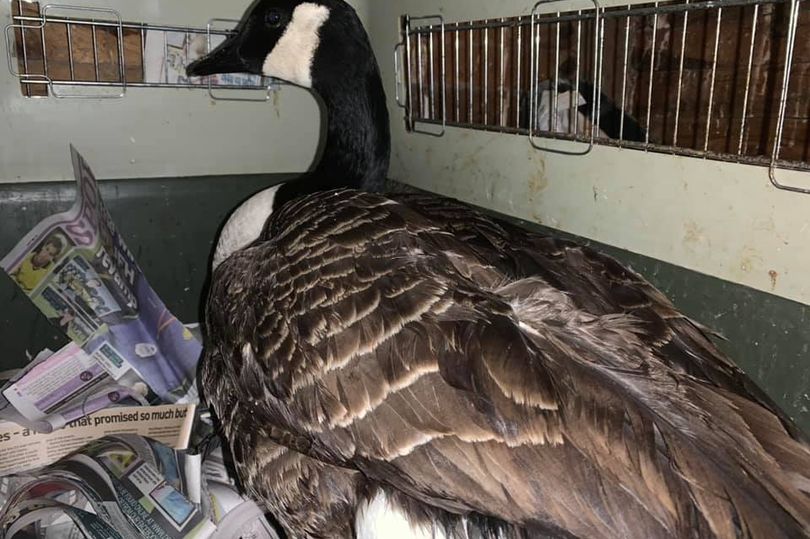 Lindsay Newell, of the rescue centre, is now urging all fishing clubs to check regularly for snagged fishing lines on trees. She told Staffordshire Live: "We had an emergency call to Branston Water Park after an angler had noticed a Canada Goose in trouble. He could see it was tangled up in fishing line that had become tangled in a tree and was struggling to free itself.

"The wing is broken at the end and is extremely swollen due to the line being tightly embedded into the skin. The swelling was so bad that serous fluid had begun pooling under the skin and leaking out under the pressure. There is also a wound caused by the line cutting in and we removed a large amount of line that was tightly wrapped around the wing.

"He's had pain relief and antibiotics and the wing has been cleaned up, although it's still leaking fluid caused by the swelling. Despite his injury, he's very lively, a good weight and even gave me a big thank you by biting me hard.

"I'd like to thank the fisherman for his help in launching the boat and ringing us to get the bird help. I'd also like to thank the gentleman that messaged us to make us aware of the issue. We don't like to tar all fisherman with the same brush but we urge them to report snagged line to their fishing clubs and ask fishing clubs to have a policy to get a boat out and regularly check for snagged line on trees."