The RSPB Investigations team has revealed that a gamekeeper used a live owl decoy to lure in Common Buzzards on a North Yorkshire grouse moor during the first lockdown in spring 2020, which he then proceeded to shoot out the sky.

The team had been monitoring the grouse moor in the Yorkshire Dales National Park for around a year, following a tip-off through its confidential raptor crime hotline number (0300 999 0101) that alive, tethered Eurasian Eagle-owl was being used as a decoy to draw in birds of prey for shooting. 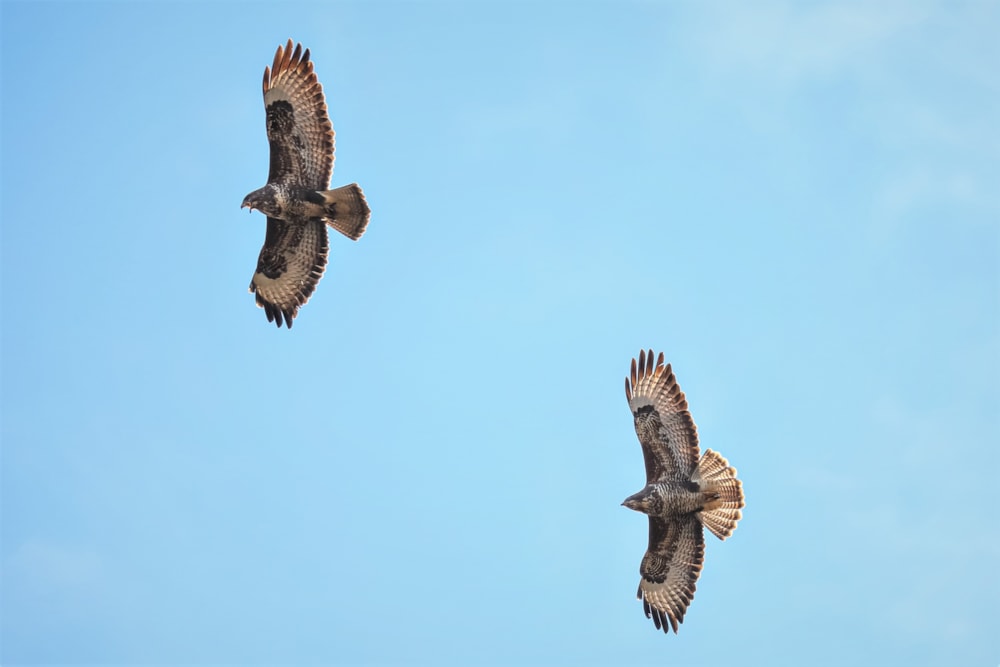 Two Common Buzzards were filmed being shot by the gamekeeper, but charges could not be brought against the offender (Peter Miles).

In addition to the obvious illegal activity of shooting protected birds of prey, there have also been welfare concerns about the keeping of eagle owls, such as in the case of a Scottish gamekeeper in 2019.

Although using tethered decoys in this manner is illegal, reports suggest that this method of drawing in birds of prey to be shot is on the rise across the UK. Armed with video cameras, RSPB operatives set out to uncover the full extent of what was happening.

After many hours of watching and waiting, on 21 May 2019, an ATV (all-terrain vehicle) appeared with a large distinctive wooden box on the rear, being driven to a spot on the moor almost 2 km from where RSPB investigators were watching. The driver took out a live eagle owl from the rear box and tethered it to a small stone cairn. He then sat nearby with his gun, but no birds of prey appeared on this occasion, and so they left. Despite a continued surveillance effort, no more suspicions activity was noted that year.

Monitoring continued in spring 2020 and, on 27 April, further suspicious activity was noted at 5 km range. The ATV was again in use and an 'object' on a post near a grouse butt, with the ATV driver sat nearby, began to flap. It was the eagle owl. The team began recording and, a few minutes later, a Common Buzzard was shot. Within 10 minutes, another had been gunned down. A third narrowly avoided the same fate. The offender then collected the body of the second buzzard and started to leave the scene on his ATV, with the owl back in the box on the back.

The ATV was seen coming and going several more times in spring 2020 and was traced back to an address near the moor. This proved to be the home of the local gamekeeper. However, the RSPB's proof – the video footage was taken at extreme distance and lacks quality – makes it impossible to definitively identify the indivdual involved in the shootings, and so a conviction was not possible.

Inspector Matt Hagen, of North Yorkshire Police, said: "We conducted a search warrant and interviewed an individual in relation to this incident. Ultimately, however, the identity of the suspect on the film could not be proved, and it was not possible to bring about a prosecution. However this does not mean the event didn't happen. We know that a gamekeeper on a grouse moor has been shooting buzzards, using a live eagle owl decoy to bring those buzzards into a position where they could be shot. We urge the public to report incidents like this to the police, and to come forward if they have information about this or any other incident involving the illegal killing of birds of prey."