Buzzard saved after getting trapped in fishing line

A Common Buzzard that got tangled in discarded fishing line has been released back to the wild after it was rescued by a RSPCA animal welfare officer.

A dog walker spotted the distressed bird of prey hanging from a bush in the island of a lake in Mollington Golf Course, Chester, and animal rescuer Anthony Joynes was sent to the scene. He could see the stricken bird hanging over the lake so put on his dry suit and swam out to help the bird. 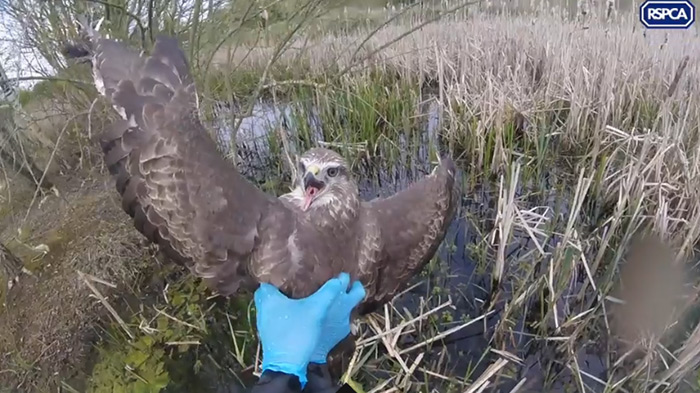 The Common Buzzard as it was freed from the fishing line (RSPCA).

Anthony – one of 60 officers trained and equipped to deal with animals caught up in flooding and launch water rescue missions – said: "I could see the buzzard had a fishing line around his wing so I swam the long way across the lake from behind to reach it as I didn't want to cause it any further distress. If the bird saw me I was worried he may panic and cause further injury.

"When I got to him I could see the line only around the feathers and not involving any of the bones and had luckily not caused any wound or serious damage. Also the buzzard was managing to balance with his talons on the ground – so although he was flapping around to try free himself he had not caused too much damage to himself.

"Sadly in situations like this birds get stuck dangling in mid-air from fishing lines and as they try to free themselves they cause more damage and many end up with catastrophic injuries."

Anthony managed to cut the buzzard free with a knife then untangled the line from his wing. He was then able to wade back through the shallower water on the other side of the lake. He examined the bird which appeared in good health, but was obviously tired from its ordeal, so he took it for some rest and recuperation.

After a couple of hours the buzzard was back to full health and Anthony released it back into the wild at the golf course.