Scientists from the British Trust for Ornithology (BTO) and University of East Anglia (UEA) recently tracked a Eurasian Curlew on an amazing journey that recorded its close shave with a huge wildfire in central Portugal.

The Portuguese government plans to build an airport on the Tagus Estuary, where 'Bowie' (named after its tag number, B/OW-OY) is now, in a move opposed by campaigners.

Bowie was fitted with a GPS tag in Norfolk this spring as part of an investigation into the causes of curlew decline in the UK. He is now on his non-breeding grounds at the Tagus Estuary, an internationally important wetland under threat from controversial plans to build a new airport.

The Tagus Estuary hosts up to 200,000 birds in winter and 300,000 on migration, among them huge numbers of Eurasian Curlew and Black-tailed Godwit, as well as Greater Flamingo, Glossy Ibis and Western Swamphen. Data from Bowie's tag show that he has recently been at the centre of the proposed airport site. If the development goes ahead, campaigners say, the combined impacts of habitat destruction and noise pollution will spell disaster for biodiversity in the region and further afield.

Bowie left the UK at nightfall on 14 July, arriving in northern Spain the following lunchtime. From here, his route to the Tagus Estuary set him on a collision course with a huge wildfire burning close to the Portuguese town of Ourém, 140 km from Lisbon. As he approached the fire, Bowie made a sharp westward turn and began to gain height. Having cleared this particular obstacle, he arrived at the Tagus Estuary in time for breakfast on 16 July. 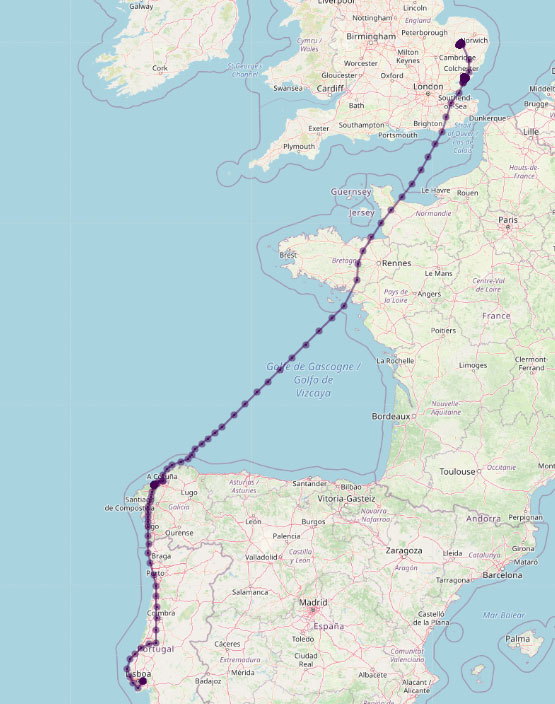 Although the UK is home to a quarter of the global Eurasian Curlew breeding population, numbers have shrunk by half since 1995. The majority of UK curlews migrate in a south-westerly direction after breeding. Most end up in Ireland or southern England, while some make it to the Atlantic coasts of France, Spain and Portugal. Bowie will likely spend the winter on the Tagus Estuary before returning to Norfolk next spring.

Dr Samantha Franks, lead scientist on BTO Curlew conservation work, said: "Curlew in the UK face habitat loss and predation pressure on their breeding grounds, which severely hamper their ability to successfully raise the next generation of young birds. Bowie's migration from Norfolk to the Tagus estuary shows that our internationally important population of breeding curlew also depends on an international network of protected sites. Across Europe, these are under threat from habitat loss, coastal development and climate change."