Scientists at the British Trust for Ornithology (BTO) have announced that PJ, a Common Cuckoo fitted with a satellite tag back in 2016, has once again returned to his breeding grounds in Suffolk.

Last year he became the first tagged cuckoo to be observed over five full migration cycles, meaning he has broken his own record this spring. The BTO has have now followed him over almost 96,000 km (60,000 miles) – his arrival this year marks at least the seventh breeding season this extraordinary bird has spent in the UK.

PJ is part of the well-known BTO tracking project designed to help us understand why the UK cuckoo population has declined by 38% in just 23 years. The picture is particularly poor in England, where almost three-quarters have been lost, while in Scotland the species is doing rather better, having increased by more than half over the same period.

The BTO began tagging cuckoos in 2011 and has since uncovered their wintering grounds and the different routes they take to and from the Congo Basin each year. Differences in survival between birds using different routes to reach the winter quarters appear to contribute to regional differences in population trends, but research into why is ongoing. 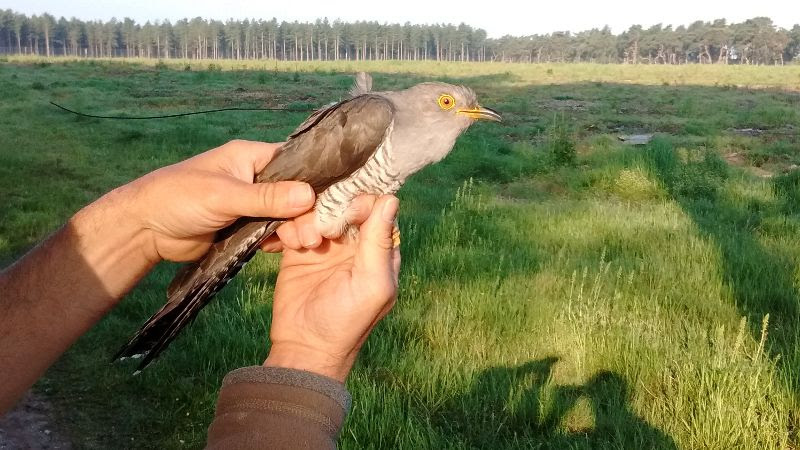 PJ was fitted with a GPS tag in Suffolk in 2016 (Neil Calbrade).

PJ began his journey north in late February, when he flew from his mid-winter location in Gabon to the Republic of Congo. From there he pushed on to Ghana and Ivory Coast, where he spent a few weeks refuelling in preparation for the non-stop Sahara crossing he began on 4 April. PJ arrived in Spain just a few days later and by 24 April was back on his territory in Suffolk.

The oldest known UK cuckoo was re-caught six years and 11 months after it was ringed as an adult, meaning PJ will have to survive another year to vie for the crown.

Dr Chris Hewson, Lead Scientist on the project at BTO, said: "PJ's performance continues to amaze us. We've been cheering him along on his journey from Suffolk to the Congo Basin and back, and we're extremely pleased that he's completed it successfully, extending his record in the process.

"Most importantly, the data that PJ and the other tagged cuckoos provide are helping us to understand the pressures these birds face on their extraordinary journeys. It's vital we learn more about these if we are to stop cuckoo's captivating sound from disappearing from our countryside."

PJ is one of six cuckoos that BTO scientists are currently tracking. More will be tagged later this spring, so keep an eye out for them as they appear on our interactive map. You can find this – and sponsor a cuckoo yourself – at www.bto.org/cuckoos.