Broady the Bullfinch wows the crowds

An unusually friendly Bullfinch has become a hit with visitors at an RSPB reserve, landing on people's heads and perching cheekily on their binoculars. The bird, who was named Broady in celebration of England's Ashes win when he first appeared on Sunday, has become a local celebrity at the Fairburn Ings reserve near Castleford. 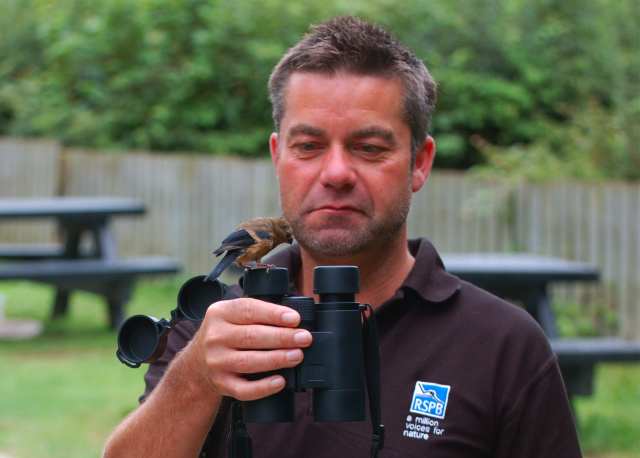 Bullfinches live in hedgerows and on the edge of woodlands but can sometimes be seen in gardens. However, they are generally shy characters and Broady's behaviour has taken reserve staff by surprise. Gwen Hanlon is one of visitor who came face to face with the brazen bird. "I was walking down the path next to the wildlife garden when I felt something on my head. I put my hand near it and the bird just hopped onto my finger," said Gwen.

But Broady didn't stop there, hopping onto several different people. And just like his namesake, Stuart, he seemed completely unfazed by all the attention, even nibbling the back of the neck of one young visitor. Darren Starkey, site manager, was bowled over by Broady's star performance, especially when he took a long hop onto his binoculars. "Bullfinches are normally quite shy and you would usually find them on your feeders or in trees, not perched on the end of your finger or on your shoulder like a parrot," said Darren. "We'd never seen Broady on the reserve before, but you can bet Dickie Bird would have loved him."