The RSPB's Hope Farm in Cambridgeshire is this year celebrating a bumper harvest of a different kind: Barn Owls. Barn Owls first nested on the RSPB's farm in 2009, but 2012 is the first when two pairs have nested — in specially created nesting boxes. Ian Dillon is the RSPB's farm manager. He said: "The Barn Owl has to be one of the public's most favourite birds and it also appears to be a conservation success story. Since acquiring the farm, we have put in nearly seven kilometres of grassy margins. These six-metre wide strips along the edges of fields create ideal habitat for a range of wildlife, including field voles: the number-one prey of Barn Owls." 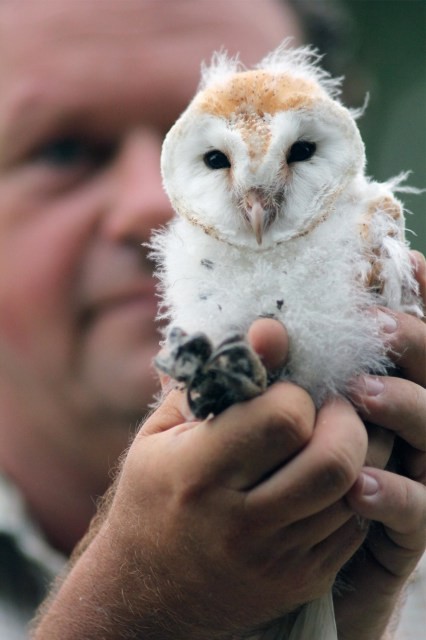 Barn Owl fledgling about to be rung (Grahame Madge (rspb-images.com)).

The achievement at the RSPB's farm seems to fit with a pattern recorded by the Breeding Bird Survey, which recorded a staggering 390% increase in Barn Owl numbers across the UK between 1995 and 2010. The Breeding Bird Survey is published by the British Trust for Ornithology (BTO), the Joint Nature Conservation Committee and the Royal Society for the Protection of Birds. Ian Dillon added: "Many other farmers are taking these actions too, and it's likely that the Barn Owl is responding well to these measures."

According to the latest information from Natural England, farmers using funding for wildlife-friendly farming (so-called agri-environment schemes) have created 30,718 kilometres of six-metre-wide grassy margins, creating over 19,000 miles of potential hunting habitat for Barn Owls in England. Kate Risely, Breeding Bird Survey national organiser for the BTO, said: "Being largely nocturnal, owls are notoriously difficult birds to monitor accurately through daytime surveys. However, we don't doubt that the results from the survey reflect a genuine increase in the Barn Owl population."

The reported increase in Barn Owls is welcome news, but there are many other birds, such as Corn Buntings, Skylarks and Turtle Doves, reliant on farmland that are still facing extreme difficulties. Sue Armstrong-Brown is the head of RSPB conservation policy. She said: "Grass margins are great for Barn Owls, but they're just one of the actions farmers can take for wildlife as part of agri-environment schemes. Flower-rich margins are vital too, as they are vital sources of pollen and nectar for bees, butterflies and other important pollinators."

Most of our farmland birds need three things: somewhere to nest, in trees and hedges or on the ground; insects to feed their chicks; and seeds to keep them going through the whole year. Sue Armstrong-Brown added: "If every farmer can provide all of these things on their farms through their Environmental Stewardship agreements, they'll be able to help lots of other wildlife on their farms too."