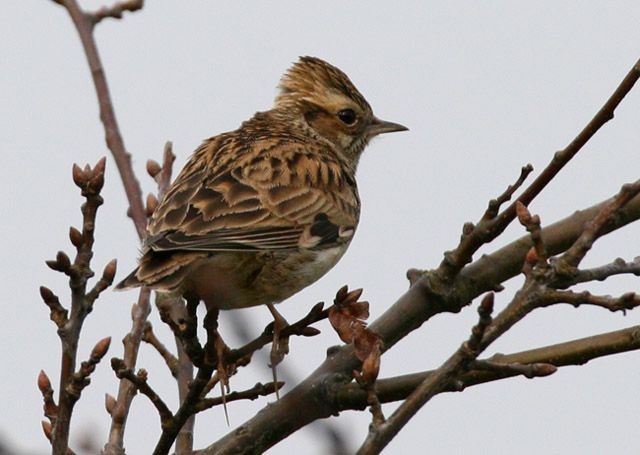 Woodlarks are returning to breed on England's farmland in greater numbers than at any time in the last 40 years. A new national survey has found Woodlark numbers in the UK have risen by 89 per cent in the last 10 years.

The rise has been driven by work to provide suitable habitat - improvements to the size and condition of lowland heaths and good management of forestry plantations. Increasing numbers of the birds now appear to be moving on to farms to breed, with many nesting on set-aside land.

There are fears however that the imminent loss of set-aside, because of changes in the way Europe pays its farmers, could limit the Woodlark's spread unless suitable alternatives are provided. 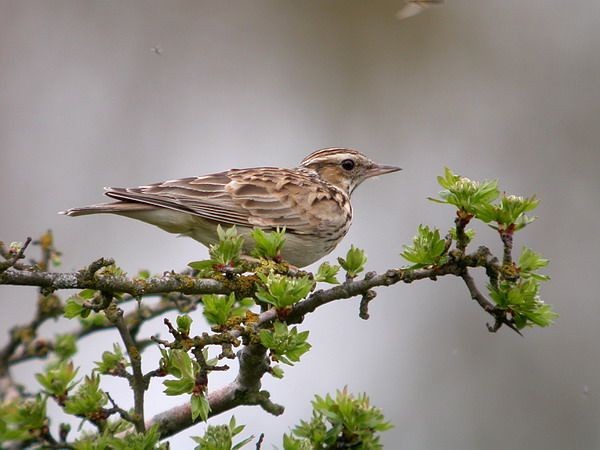 The results of the survey, carried out by the BTO, RSPB, Natural England and the Forestry Commission (England), show an estimated 3,084 breeding pairs of Woodlark, compared with 1,633 pairs in 1997 and the low point of just 241 pairs in 1986.

Traditionally a bird of heathland, farmland and more recently forest plantations, the Woodlark was red-listed as a species of conservation concern in the 1980s because of a drastic decline in its range over the preceding 20 years.

While today, the bird's strongholds remain England's lowland heaths and forestry plantations, where they thrive in clear felled areas, farmland is becoming increasingly important once again.

This latest survey shows how set-aside has tempted a proportion of the UK's burgeoning Woodlark population to return to farmland.

Simon Wotton, research biologist at the RSPB, said: "About 21 per cent of the birds we surveyed were on farmland and other grassland habitats, of which about 7 per cent was set-aside.

"It seems Woodlarks are moving on to this land from nearby heaths and from forest plantations."

Greg Conway, Research Ecologist at the BTO, who organised the survey said: "It is marvellous to see that the breeding population has almost doubled since 1997 and the range has increased considerably, with large leaps to the west and north. This survey would not have been possible without the support of hundreds of birdwatchers, to whom we are all extremely grateful".

Set-aside was introduced in 1992 with the aim of taking land out of production to reduce the EU's infamous grain mountains. The move proved an accidental boon to wildlife, including many birds, by providing a source of food in the winter and somewhere to nest free from disturbance. Recent changes to the way subsidies are paid to Europe's farmers now seem to have made set aside redundant and it is likely to be abolished by the European Commission next year. 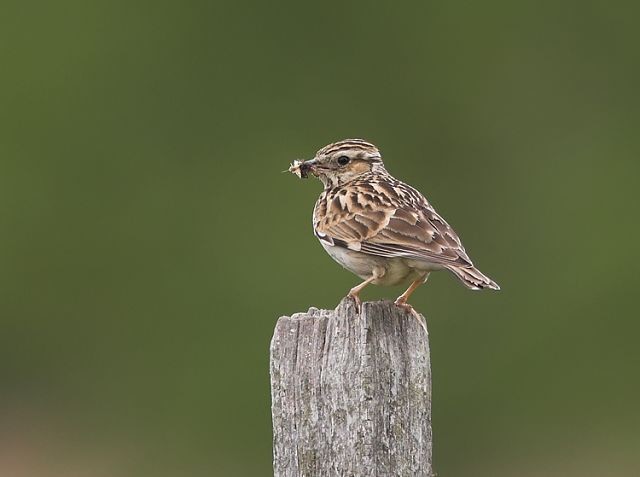 Sue Armstrong-Brown, the RSPB's head of countryside conservation, said: "The return of the Woodlark to our fields, heaths and forests is brilliant news - and shows how important set aside has become as a refuge for wildlife on our farmland.

"The crucial thing now is to keep the environmental benefits when the policy is updated. Birds like the Woodlark are trying hard to adapt to the new ways of managing the countryside and we must not sabotage their recovery.

"We must increase our efforts to restore and manage lowland heaths to create suitable conditions for the Woodlark and also ensure that the management of forestry plantations provides suitable breeding habitat."

Natural England's senior ornithologist Allan Drewitt, added: "It is encouraging to see such a dramatic increase in the numbers and breeding range of Woodlarks. This is largely the result of improvements to their lowland heathland habitats by conservation bodies including Natural England, the RSPB and local wildlife trusts, and the efforts of the Forestry Commission in providing and maintaining suitable nesting areas in their plantations.

"The £25m Heritage Lottery funding of Tomorrow's Heathland Heritage has done a lot to help heathland species like the Woodlark.

"We must now increase our efforts to restore and manage lowland heaths for the Woodlark and other wildlife, and also ensure that the management of forestry plantations continues to provide breeding habitats."

Forestry Commission ecologist Jonathan Spencer, said: "It is good news that the forest habitats and heathland creation we have developed in key areas have supported the Woodlark population, enabling them to increase and return to more traditional habitats.

"We are committed to working closely with partners such as the RSPB to support priority species, and for survey results like this to help guide us in our woodland and habitat management."

The 1997 survey showed woodlarks breeding in Yorkshire for the first time since 1958, with two territories recorded. In 2006, this had leapt to 35. Woodlarks are likely to have spread into the county from the populations in neighbouring Lincolnshire and Nottinghamshire, where heathland creation and restoration in Sherwood Forest has helped to increase the population during the 1990s.

In South West England, woodlark numbers have increased by a third since the last survey in 1997. The Devon population has stayed relatively stable since 1997, but it is still found mainly in the traditional farmland areas east of Dartmoor, particularly around the Teign Valley. An increase in Dorset is probably due to the restoration and management of significant areas of lowland heathland and the sympathetic management of forestry plantations.

Written by: RSPB, BTO, Natural England and the Forestry Commission England
Login to leave a comment
Return to List