A teacher will be swapping his blackboard for his bicycle in 2010 and embarking on an unprecedented journey to cycle to all RSPB nature reserves. We've all dreamed of a project we might like to complete if we had the time, patience or organisational skills, but Gary Prescott, 53, is turning his dream into a reality this year. 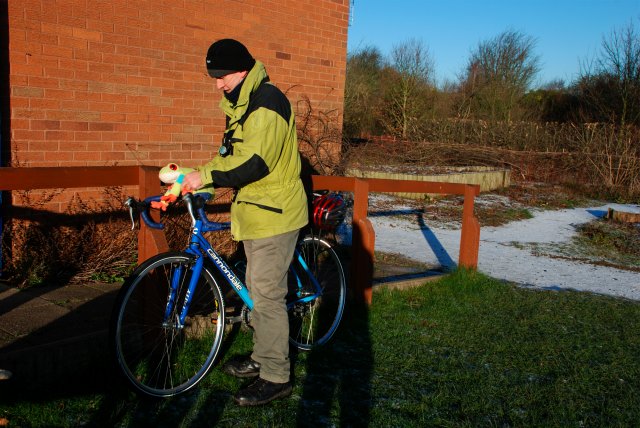 Gary sets out on his big adventure (Photo: RSPB)

Gary has vowed to spend the whole of 2010 cycling approximately 5,000 miles to every one of the RSPB's nature reserves, raising money for his beloved wildlife charity as well as Asthma UK and the Wildfowl & Wetland Trust. On rare breaks from pedalling, he will be visiting schools around the UK on his journey, to spread the message about the threat of climate change and to encourage his young audiences to do their bit to help halt it.

Gary very nearly began his epic adventure five years ago, but it didn't quite come together. Some health scares since his last plans have encouraged him to push forward this time and he set off from his local nature reserve, RSPB Sandwell Valley near Birmingham, on January 1st. He hopes to end up at the charity's UK headquarters in Sandy, Bedfordshire, at the end of the year, having racked up more than 250 species. To help him along the way BirdGuides have donated a platinum subscription to our bird news services.

No one has ever been to every RSPB reserve in one year by any transport means and in doing so, not only will Gary be breaking records, he will be combining his love of wildlife with his hobby of cycling. Gary has only been cycling for eight years since he was told it's a great form of exercise for asthma sufferers. The longest distance he will cycle in one day will be around 74 miles.

Governors at Rigby Hall Special School in Bromsgrove, where Gary teaches, have granted him a year's career break to achieve his goal. As the school is a 'green school', they applaud his plans to visit other schools affiliated to the Eco Schools programme and to share his story and ideas on being green with children and staff.

Gary says: "The day I decided to complete this project to cycle to every single RSPB reserve was much like every other. I was commuting, and I'd rather have been birdwatching. The RSPB was there when I wandered lonely as a teenager, not realising that other people shared my obsession of watching birds. It's one of the main charities that I hope to raise money for through my trip. From a simple desire to do more birdwatching, I am now ready to set off on what I hope will be a life-changing experience. I would like people to think about what they are going to do to help prevent catastrophic climate change and donate money to the RSPB and other charities I'll be representing on my journey."

Gary is dedicated to doing all he can to educate people on the very real threat climate change poses. As part of this action he's supporting the RSPB's campaign, Letter to the Future, in their urgent call for politicians to save nature for future generations. Visit rspb.org/letter for more information and to sign the online pledge.